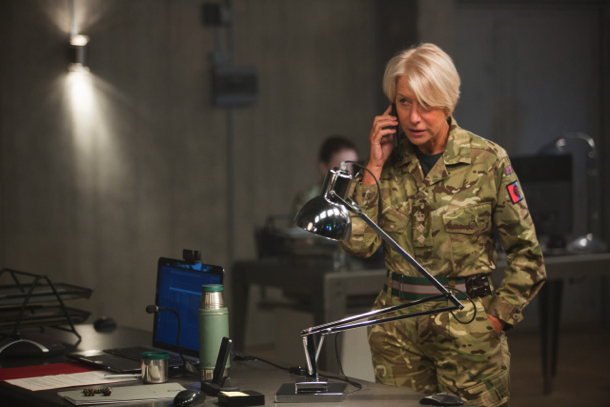 Aaron Paul is a drone pilot who balks at pulling the trigger for Helen Mirren in Gavin Hood’s new film.

Before you dismiss EYE IN THE SKY as just another film about terrorism, think again. Gavin Hood’s gripping imagined drama is a tightly-plotted moral maze that places us right in the heart of the decision-making process with a front row seat.

In this Drone Drama, you will share and sympathise with army chiefs and governments ministers, the decision-making red tape that has to be gone through, laboriously and stringently, before anyone can pull a single trigger. The War on Terror is a now worldwide issue but here the anxiety here is distilled into a the sweaty confines of a tiny boardroom where the ‘powers that be’ debate and clash over matters of life and death under pressure and with nerves of steel, making sure that their own backs are covered in the chain of responsibility. Hood shows us the man at the coalface who feels his responsibility to his target just as keenly as a soldier confronting a civilian face to face – on the streets or battlefield.

But where Hood’s thriller falls down is in imagining that so many major minds would be involved in the life of one single person – and that Government ministers and trained soldiers could be driven to tears over such a decision. That said, Guy Hibbert’s script feels plausible and persuasive: in a Whitehall Cabinet office senior officials are summoned by Lieutenant General Frank Benson (Alan Rickman in a masterful final role) to curtail the activities of “most wanted” set of terrorist villains including a British woman allied to the Al-Shabaab militants in Nairobi. Meanwhile an American drone is gliding over the African village and sending information to British Colonel Katherine Powell (a steely Helen Mirren), who in turn is reporting back to the Cabinet and also liaising with her ground staff and local troops in the village locale. The order is sent out to capture but not to kill.

These highly-skilled ground operatives also have at their disposal tiny remote-controlled insect-shaped drones equipped with cameras that can fly into buildings and monitor the movements of their desired targets. As such they are sent in motion by these trained allies in ‘civvies’ nearby, to assist in the bombing of headquarters of the praying terrorists, who are plotting their ambush. Crucial also is the damage limitation required in such an exercise: the chances must be weighed up of a bomb causing collateral death and destruction. In particular, to a  little girl selling bread in the street outside the perpetrators hide-out. To humanise the little girl, we see her  sans hijab, with her parents in their home. When her mother has baked the bread, she is sent off with her camping table to sell her wares.

There are some terrific moments of tension where we root for the ground ally (Barkhad Abdi) and empathise with the ministers and Powell who is tasked with completing her vital mission. There is a deadly humour too to the board room buck-passing that shows how ultimately politicians always cover their backs before reacting; it is not doing the right thing that is important, but how it will be perceived in the newswire aftermath. MT