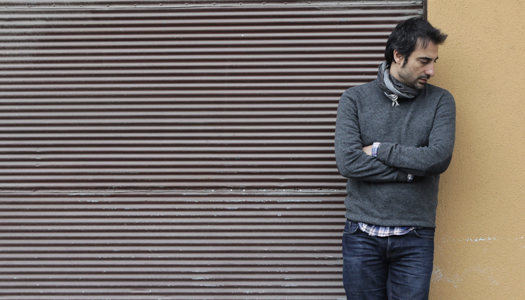 Co-directors Kurtulus and Saracoglu (Orada) have found an original way to tackle a serious topic: Melik Saracoglu’s serious eye condition, which might of condemned him to a life of blindness, having already lost the sight in one eye as a teenager.

After a quick de-brief of his childhood, the autobiographical narrative starts in Lyon, were Melik is studying film. He soon becomes aware of the retinal detachment in his only functional eye, and has to return hastily to Istanbul for an operation, which involves a convalescence of forty days lying on his stomach, taking endless medication. His close family: mother Bilgin, father Ismail and his brother, had to keep an eye on him during the night, in case he slept on his back. His girlfriend Öykü – who had only just recently been joking that she would scratch his eyes out if Melik if responded to romantic advances from a French girl Elodie,  joins in the family vigil. After the retina starts detaching itself again during a family dinner; a second, even more complex operation is needed, and Melik sinks into depression. In his vivid nightmares he meets a producer, an actress and a critic, who reject him.

EYE AM is shot in an anamorphic format (shooting widescreen on 35 mm non widescreen native aspect ratio), which is a perfect way of demonstrating the shattering world of Melik, unable to find a way to live in a world where sounds become overwhelmingly threatening, while the darkness closes in. Melik’s own voiceover explains the panic, particularly when he nearly loses his sight completely after the first operation: “welcome to the longest night of my life” he comments, fearing the worst. But EYE AM is also subversive, using clips from Turkish melodrama to illustrate his blindness. And Melik’s grandfather’s welcome sense of humour cuts through the horrendous pain Melik is going through, with his witty remarks, which are sometimes totally off the mark. The directors also make fun of the the rivalry between the various members of his family and their middle class attitudes that are full of hypocrisy and self-righteousness.

EYE AM is innovative and original and feels authentic in its effort to balance aesthetics with a humane message. It is perhaps too much to call it a feel-good movie, but the director manage to offer us a sparkling blend of nightmarish scenarios and brilliant visuals that are always refreshing, despite the grim subject matter. AS