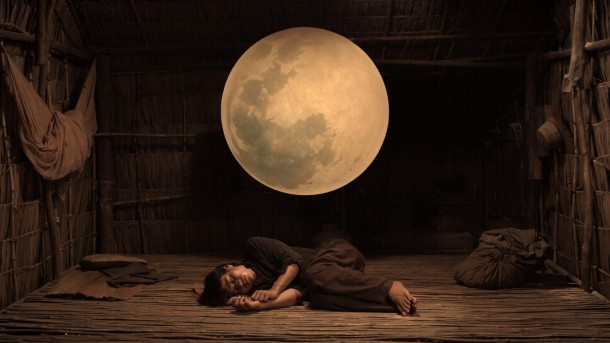 Cambodian filmmaker Rithy Panh is critically acclaimed for his documentaries that explore and focus on the aftermath of the genocidal Khmer Rouge regime in Cambodia. And he speaks with authoritaty: his family were expelled from Phnom Penh in 1975 by the Khmer Rouge. One after another, his father, mother, sisters and nephews died of starvation or exhaustion, as they were held in a remote labor camp in rural Cambodia.

His latest doc aptly entitled EXILE offers more footage from the past and pre-revolution Cambodia but nothing new to the present with the filmed imaginings of a solo man in exile eeking out his existence and going through the motions as he sombrely survives day to day in a pre-fab wooden hut, as he drinks rainwater and forages for insects roasted on an open flame. These are deftly intercut and invigorated with 35ml original footage of lively news cuttings and musical recordings of his beloved country during the ’60s and early ’70s, all illuminated by his initially poetic but ultimately tedious musings on a voiceover narrative. While his plight and suffering is noble and courageous, Panh’s fascinating archive footage is the only worthwhile takeaway here. MT