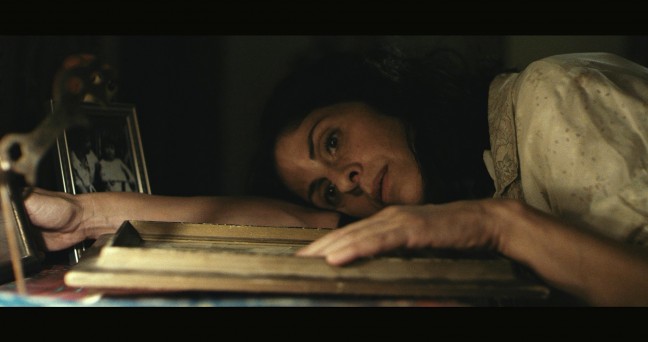 Sophomore director Haim Tabakman (Eyes Wide Open), made his name as documentary filmmaker. His second feature is a slow-burning chamber piece whose characters wrestle with the legacy of the Shoah.

Set in a rural outpost in Israel in 1972, newly retired Yoel (Kushner) looks after his wife Ewa (Ben Zur), who suffers from a non-specified blood disorder, requiring daily injections. But Ewa still goes out to work everyday, whilst Yoel is bored with his newfound free time. Whilst looking for some papers in a ramshackle outhouse, he finds a letter from the bank, reminding his wife to pay a mortgage instalment for a flat in the nearby village. Yoel investigates, and finds that his wife has installed a lover in the flat. Yoel talks to the man, and asks him to repair his old motor-cycle, which he stole from the British in 1946. From neighbours Yoel discovers that the man’s name is Emil and has been in a German concentration camp – just like his wife Ewa. In an interesting conversation with the policeman Kobi, whose father also spent time in a Camp, Yoel is reminded that surviving the KZ is not the end of the matter: “My father still lives in the Camp” says Kobi resigned. Confronting Ewa, Yoel is shocked to find that Emil is her husband, whom she married before WWII in Poland, before they were both deported to the Camps. “He died in the camp, but then he was alive”, says Ewa rather enigmatically.

It soon transpires that Ewa has spent an unspecified, but certainly decade-long time living with two men. After Yoel tells his wife that he intends to evict Emil, she has a relapse and spends some time in hospital, whilst Yoel moves Emil’s furniture into the outhouse, where both men go on repairing the motorcycle. After Ewa returns, Yoel swears “that he has enough of this madhouse” and wants to move out. But deep down, he knows, that there is only one solution.

The trio seems to live in a bubble more or less cut off from the outside world. True, Yoel and Ewa’s daughter Judith visits with the parents with her boyfriend Eyal, Judith confining in her father, that she is pregnant, “but don’t tell Mum”. After that we never see Judith again and we are left watching this painful ménage-a-trois develop. And painful it is: Ewa with her divided localities, Yoel, who thinks that he has a right to “own’ Ewa, because they have a child, and Emil, lost in a strange land, clinging on to Ewa, because she is the only link to his past. Ewa and Emil: both doubly fragmented by having to make a choice, they don’t want to make. And in the background the monstrous holocaust: trying to destroy lives many decades after the survivors were “liberated”.

DoP Axel Schneppat, who worked with Tabakman on Eyes wide open, lets everything unfolds slowly, showing the desert like countryside as an depressive background to the unfolding of the past reconquering the present. Brown and grey dominate, even the hospital is filled with ghostly colours. The three act out their grief with emotions always underplayed. EWA makes a passionate point about the post-traumatic hell of holocaust survivors, but is still tender in showing the unbearable loss. AS