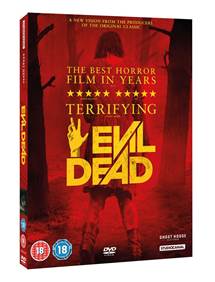 A reboot of the Sam Raimi classic of 1981 and I find myself having the same conversation with myself as I did when I saw Texas Chainsaw 3D.

These reboots have all the bells and whistles, all the blood, the unflinching shots of dismemberment or stabbings, with clinical, graphic digital detail and thunderous, all-piercing 5.1 Surround Sound, but for all of this, they remain a mere shadow of their original forebears, for all of the 16mm footage with mono sound, shot on a shoestring.

So what is it? I think perhaps the current concept of  ‘Horror’ needs to be reclassified. It is no longer Horror. It has become ‘Shock and Gore’, with surprisingly little horror; the shock and constant unease coming almost entirely from the unremitting soundtrack, rather than the visual narrative. And there is a festival of blood.

The skill of Horror has been lost, rather as in action films too, lost to the ability of highly skilled Digital Special Effects wizards, capable, for the right budget, of providing anything a writer or director can dream up. Plus. And this is great, so long as it is tempered by and married with a really strong idea of suspenseful storytelling and what is left out.

To give it it’s due, there are some good, unexpected plot turns, but these in the main serve only to increase the ‘jump’ factor. The dialogue, especially early on, is also particularly contrived, not helped by lines like ‘is that ..blood?’

Director Fede Alvarez was selected for his youthful take on the genre and the fact that he made a low-budget online Short called Panic Attack that went viral, taking more than 7 million hits. That’s impressive and all power to him. He shot the film well.

So what is it about? Mirroring the original, five youngsters head out to a log cabin in the woods to help one of their number quit the shit and go cold turkey, free of any distractions or the possibility of relapse, only to discover their cabin has had a break in and there’s a really putrid smell emanating from the basement. I don’t think I need to say any more.

What I take away from this film, as well as any number of other similar is, when faced with the decision about where to go for a short trip/weekend/holiday in America, just don’t choose the camping/log cabin in the woods miles from anywhere option. Go Disney. Or Hawaii. Or even Vegas. Especially if the girls are fit and one of your number is an ethnic minority. AT

EVIL DEAD is released in UK cinemas on April 19th