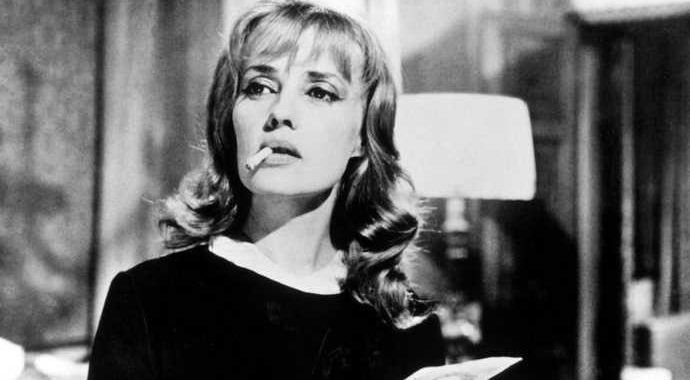 Jean-Luc Godard was originally slated to film this classic paperback hit from James Hadley Chase, whose novels provided rich dramatic pickings for the big screen (around 50 were filmed). The Franco-Swiss director wanted Richard Burton as his leading man, but it was another Welsh actor, Stanley Baker, who finally stepped up to the plate and his choice of helmer was Joseph Losey. And it was a memorable one.

Stanley Baker had already triumphed as a saturnine but alluring tough guy in Losey’s Blind Date (1959) and The Criminal (1960) the two developing a well-oiled working relationship, so Baker had no problem selling him to the producers, Raymond and Robert Hakim. Jeanne Moreau manages to tease out Baker’s raw romantic credentials in the stylish thriller, but Chase’s pulp fiction style sat uneasily with Losey and his two scriptwriters Hugo Butler and Evan Jones – Losey eventually falling out with his long term friend Jones, who had also been a victim of the HUAC witch hunt. The result was a critical and financial disaster – but has stood the test of time, Eva now being one of the cornerstones of Losey’s oeuvre – and also his personal favourite.

Eva begins with a prologue: Jeanne Moreau sailing by on a water taxi in a wintry Venice. A mournful trumpet prepares us for the gloomy outcome. The credits roll and we see Eva approaching Harry’s bar, where Tyvian Jones (Baker) holds court, telling the story of his brother, a Welsh miner (like himself). He is accosted by Branco (Albertazzi), the producer of the film adaptation of Tyvian’s novel: it is the second anniversary of the suicide of Tyvian’s Italian wife Francesca (Lisi), whom Branco loved.

Cut to Venice Film Festival two years previously, when Tyvian is seen water-skiing, as Eva looks on. Francesca is madly in love with her Welshman fiance, who is too busy to celebrate the success of the film version of his novel. A rainstorm brings Eva into Tyvian’s life: she and her client force entry into into the writer’s rented hideaway on the island of Torcello. Eva makes herself at home in the bedroom – to Billy Hollidays’ Willow, Weep for Me – and later takes a bath. When Tyvian enters she shrugs her shoulders nonchalantly, ignoring him. The writer throws out the client, thus entering a relationship which will destroy him – even though Eva tells him she is only in it for the money. But after Tyvian remarks: “let’s see, what you can do”, she knocks him out with a huge glass ashtray.

Tyvian is already engaged to the charming Francesca (a delicate Virna Lisi) but he becomes mesmerised by Moreau’s Eva who slowly ensnares him – it’s a magical performance from Moreau but Baker is equally enthralling. The Hakim Brothers cut the 155-minute version, and withdrew the feature from Venice Film Festival. A later cut shredded even more of the storyline, leaving just a 100-minute feature at the premiere in 1963.

How much Losey himself was involved is still a question. But there is much to admire: Michel Legrand’s jazzy score, andparticularly DoP Gianni Di Vinanzo’s sparkling black-and-white images of Venice and Rome. There are also intricate interior shots, using the mirrors in Eva’s apartment to show the compelling interplay between the lovers. In The Servant, Losey’s next feature, it was James Fox’s turn to be caught in the mirrors of his supercilious superiority. The only difference between the two films is that Robin Maugham’s book and Harold Pinter’s script for The Servant were far superior to the Chase/Butler-Jones version of Eve. When all is said and done, Losey’s original film far outstrips Benoit Jacquot’s 2018 remake, and not even Isabelle Huppert can save that pale rider. MT