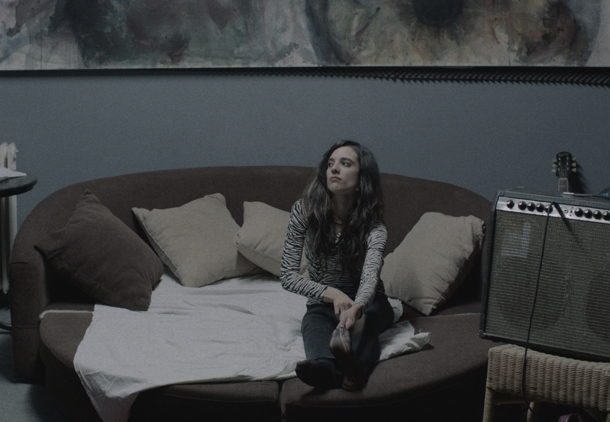 In Tallinin, Veronika and Harri make ends meet with their three children and pet dog. Whilst he is a car mechanic, she, a waitress, is supplementing their income as a dancer in a bar. The past makes their live difficult: Artur is Veronika’s son from a former relationship, and Harri has difficulties bonding with him, even though he makes an effort in the end. Harri too has a daughter and will meet the 13year old for the first time. The family spends a lot of time in front of the TV, the atmosphere is often strained, but it is not a lack of love, so much, as the harsh economic the circumstances surrounding them.

Karo and Juan have just met in Sevilla and their sex life is naturally active. But the first signs of jealousy emerge in an argument about his ex-girlfriend. Childless, they spent most of their time in bed, discussing plans to emigrate, which he rejects “because I love to be in Sevilla”. But the economic hardship might make him change his mind. Life for them is discussing, making love and enjoying the outdoor life in this romantic city.

Thessaloniki like the rest of Greece is in turmoil; teetering on open civil war. After a murder committed by the fascist ‘Golden Dawn’, massive demonstrations call for revolution. Penny, and her much older boyfriend Nicolas are constantly arguing: she wants to leave the country with him, whilst he wants to stay. Even the cat, Evita, is used as an object of strife: when Nicolas feeds her gourmet food, Penny explodes, because she believes the cat is getting to fat. Penny also accuses her partner of seeing his ex. But it all boils down once again to economics: she is a waitress, he delivers pizza. The outcome of the emigration debate, one feels, will make or break their relationship.

In Dublin Siobhan and Terry live very much like a retro-couple of the Sixties: drugs and music dominate their life, their lovemaking is often affected by their drug habit. They seem surprisingly happy, treating their cat like a baby and forgiving each other’s transgressions with regularity. Tending their vegetable garden on their roof, where the washing is drying: this is bohemia! Unlike the others, they do everything together, even feeling sick after another drug binge. The most content of the four, though interestingly the poorest. These two have closed the door on reality and the future, living on borrowed bliss in world of their own.

All these couples are interesting in their own right, but Gassmann destroys the narrative momentum by cutting from one to the other, a structural technique that simply doesn’t work in this context. And do we really want to see other couples making love at length in a documentary? These extended sessions simply feel like voyeurism and add nothing to what is otherwise a thoughtful and insightful study AS