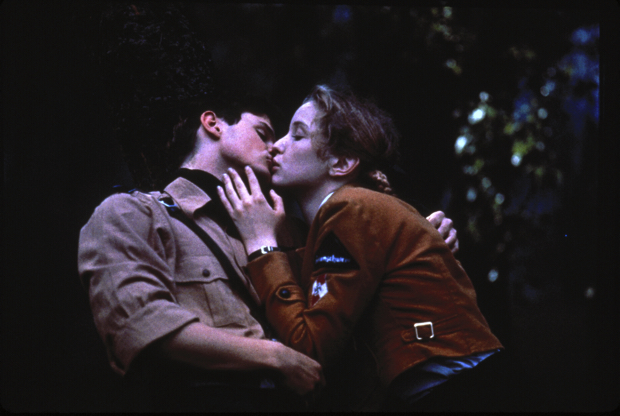 Polish director Agnieszka Holland follows her mentor Andrzej Wajda from Poland to France for this true story of Solomon Perel. Based on his memoirs, it focuses on his extraordinary escape from Nazis Germany and his successful time in the Hitler Youth.

Young Solomon (‘Solly’) (Hofschneider) loses his sister on the eve of his Bar Mitzvah at the Kristall Nacht Pogrom. After the family emigrates to Poland, Solomon flees with his brother to the USSR at the outbreak of the War, but the siblings are separated. In the USSR he fetches up in an orphanage falling in love with the attractive teacher Inna (Delphine Forest). After the Nazi army overruns his village, he burns his identity papers and calls himself Joseph Peters, claiming to be of German blood. The German soldiers take to him, and use him as a translator. In this capacity he helps to interrogate Yakov Dzhugashvilli, Stalin’s son. He witnesses the atrocities of the Germans against the Russian population, but has to stay quiet, since he is now the mascot of his division, under the nickname of ‘Jupp’ given by his protector Hauptmann Kellermann (Wilms). The soldiers deem that ‘Jupp’ should have a good education in Germany, where he joins the Hitler Youth Academy – but not before being seduced by a middle-aged Nazi functionary, Rosemary, who climaxes with an ecstatic “Heil Hitler”.

At the Elite School, ‘Jupp’ then falls for Leni, a member of the “Bund Deutscher Mädchen“ (the female equivalent of the Hitler Jugend). After a particularly vicious anti-Jewish outburst, Jupp abandons Leni, who soon falls pregnant by Jupp’s best friend Gerd. Leni’s mother, well aware that Jupp is Jewish, does not give him away. When the Russians occupy Germany, Jupp is saved by his brother Isaac, as the Russians (rightly) do not believe that a Jew could be a member of the Hitler Youth. Finally Solomon Perel emigrates to Palestine, where he does not have to hide his Jewish identity any more – he can be Solly again..

Jacek Petrycki’s visuals underline the epic narrative with long panning shots and panoramic views of the fighting scenes; the images often reminiscent of Soviet realism. Hofschneider is utterly believable as the naïve boy who has to fight throughout the whole film to keep his circumcised penis from view. Holland directs with great sensibility, struggling to control the rather sensationalist plot. This is not her fault: most feature films about the Holocaust are by nature melodramatic but this should never submerge the tragic events. Often unavoidably cliché-ridden, Europa Europa, is a good example of why – after Lanzman’s Shoah – feature films, how ever well meant, rarely offer new information on the crimes against humanity, and very often detract from the real events by unintended trivialisation. AS