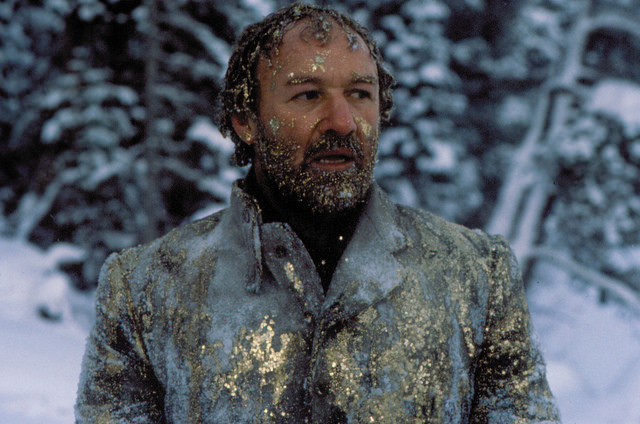 Nicholas Roeg is a living legend: his films are unique in finding ways of portraying man’s struggle with the mysteries of the universe; in viscerally capturing what it is to be human: Walkabout; Don’t Look Now; The Witches; The Man Who Fell to Earth. They are all romantically sexual, visually audacious; formally superb, thematically adventurous and always powerfully acted and intense as here with this fascinating mix of European and American talent – Mickey Rourke, Joe Pesci and Rutger Hauer at their elegant best before they went for seedier roles, a delightfully graceful Jane Lapotaire and Theresa Russell, the sensual jewell in the crown. Gene Hackman is captivating and masculine in the lead, rocking a rather ill-advised yellow tint in his receding coiffure, he is nonetheless the svelte hero of this impressive fantasy drama. He also gets some dynamite lines: “I’m the most dangerous man I know – once I had it all, now I just have everything”.

EUREKA is a complex tale about greed, power and passionate love. And Roeg certainly knows what it is to be in love and how to express that potently through his characters. Based on a true story, in 1925, a man (Jack McCann-Hackman) finds a rich source of gold after being empowered by a supernatural lover in the magnificent opening scenes – a ‘mystic Meg’ (Helena Kallianiotes) who has the wonderful line: “we had all the nuggets we needed between your legs”. Becoming the richest the man in world however is not the answer to his dreams, as more complex issues start to emerge in this imagined utopia. 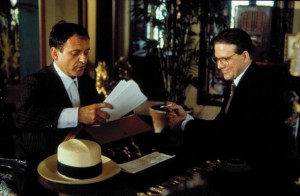 From the icebound snowscapes of the Yukon we fast forward to a sultry Caribbean Island of Eureka where Jack now holds sway in the Colonial splendour of 1945. Married to a soignée Coco Chanel lookalike Helen (Jane Lapotaire), the couple no longer have sex so she passes her time reading the cards in hope of inspiration (“You don’t want your fortune told, you’ve got a fortune” quips Jack). They have a daughter Tracy (Jane Russell) whom Jack is obsessed with physically and emotionally but, despite still being daddy’s little girl, she has fallen madly in love with Rutger Hauer’s Claude Maillot Van Horn, a statuesque roué whom Jack falls out with on a regularly basis amid scenes of hilarious violence involving meat cleavers and vituperative exchanges. Strangely, Tracy is also deeply in love with her father but she is sexually in hock to Van Horn. The serpentine narrative is driven forward by Jack’s almost psychotic belief that everyone is after his money: and they are in their various ways.

EUREKA is fascinating stuff: the elegant costumes, spectacular set pieces with cleverly devised supernatural and voodoo elements often threatening to topple the intoxicating narrative but pacing and editing never allow this to happen; Roeg deftly mixing moments of raucous melodrama with some quieter more meditative scenes. Theresa Russell keeps things exciting both in and out of the bedroom with her extraordinary range of looks (designed by the talented Marit Allen – Eyes Wide Shut and Brokeback Mountain), appearing sexually alluring one minute; kittenishly coy the next and elegantly vivacious in the explosive final court scene. Russell had just married Roeg at the time and was only in her mid twenties but clearly possessed an amazing maturity and feminine allure for one so young.

Paul Mayersberg’s script is fantastic: full of witticisms, truisms, all endlessly engaging and Roeg brings a scintillating vision to the party with his larger than life characters: women who really know how to exude love and sensuality and men who are masterful and powerfully driven despite their human weaknesses. Hackman and Russell hold sway with their magnetism and extraordinary charisma in this intensely watchable, often complicated, but extremely rewarding rollercoaster. MT