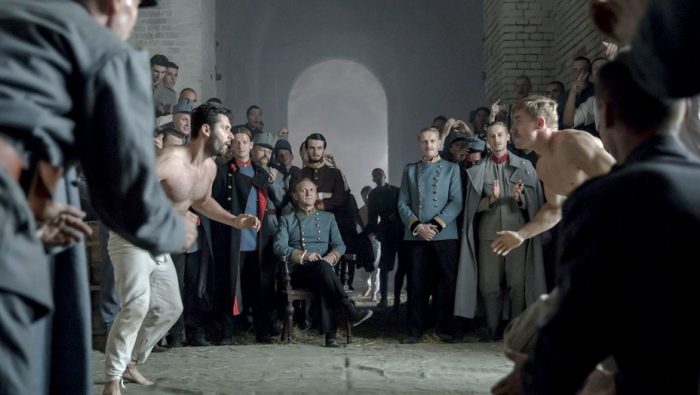 The theme is topical enough, that of dumbing down and confusing the population while the major powers take control. Since the era of communism, the ‘Polish Great’ directors have been well-versed in couching their political messages in subtle ways, as here in this rather genteel arthouse drama stylishly photographed by DP Piotr Niemyjski, whose lighting gives ethereal touches in just the right places.

The opening scene explores in detail Hans Memling’s 1467 tryptich ‘The Last Judgment” hinting at the haunting religious undercurrent to the storyline. But the main narrative focuses on the debonair doctor who is running a series of experiments with ether, a safer anaesthetic replacement to the drug, chloroform. During the process he decides to casually rape his female patient after knocking her out with the new-fangled substance. Leaving her for dead, he escapes but is captured, arrested and eventually committed to exile in Siberia, whence he takes up a post for the military on the border of the Ukraine and the Austro-Hungarian Empire.

Poniedzialek plays his role with icy detachment and deadly dedication showing how nothing will stand in the way of his scientific research. Clothed in either white overalls or black leather with gloves to match, he cuts a sinister figure in this remote backwater, pushing his patients beyond their pain thresholds with his new drug, far from the prying eyes of decency. All this to the tune of Wagner’s opera Parsifal, as the doctor hunts for his own holy grail.

This doctor is a entirely focused on his methods for domination. An ascetic, detached character he clearly has a God complex subjecting his patients to pain and bewilderment, mirroring the atrocities of the First World War (that was on its way). The doctor here is in complete contrast to the dedicated medic in Aleksey Balabanov’s Morphine (2008) who was using a drug to bring relief to the agony of his patients 150 miles north of Moscow, during the Bolshevik revolution. Our Polish doctor also makes use of the services of a poor devout Catholic boy called Taras (Ostap Vakulyuk) who gives up his father’s corpse for medical science then discovers him later embalmed in the doctor’s museum.

Some of the scenes are deeply disturbing. In one the doctor delivers a tiny crying baby only to smother it minutes later, telling the mother it would have died anyway. In another, he injects a soldier with a substance that makes him a fierce and fearless fighter, biting his wrestling components, until the doctor calls for a straight-jacket.

The final scenes comes with an explanation: “The Secret Story” that tracks back to the religious aspects of the story and introduces a previously low-key figure who appears to be the grim reaper himself. Ether ends in the rain-soaked mud of WWI where Zanussi examines the question “Does suffering have a meaning?”. Clearly the doctor has made a pact with God but has lost his soul in the meantime. MT