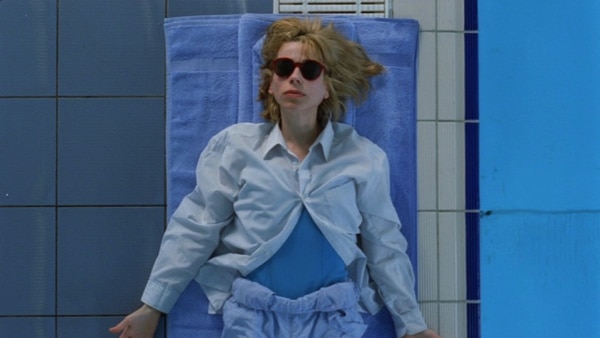 Films about mental health are always challenging for viewers, crew and cast. Craig Roberts has jumped into the deep end for his debut as a director but struggles to remain true to his cause.

Eternal Beauty is about a paranoid schizophrenic young woman, Jane (Hawkins), whose life is turned upside down when her lover Johnny leaves on her wedding day. Craig tries to show Jane not as an out-and-out victim, but as a person in her own right. But he undermines any realistic approach with his tricky camerawork: out-of-focus images and tilted angles just don’t work here. Over-the-top acting by the unlikeable support cast further undermines any claim to realism Craig may have.

Jane imagines she is still in contact with Johnny by phone – not only on her house phone, but any public phone she passes. She harks back to her younger self (Clark) through spy holes all over the place, including the psychiatric ward where she was submitted to electro-shock therapy. Her parents Vivianne (Wilton) and Dennis (Pugh) are helpless but very much set in their lower middle class identities. Sisters Nicola (Piper) and Alice (Lowe) could not be more different: former beauty queen Nicola craves male attention and protection, finally finding a man to marry her in the much older Lesley (Leader); Alice takes care of Jane, while her husband Tony (Hilton) cheats on her. And then there is pushy young Lucy (Bernhard-Shaw) who feels like a replacement daughter for the three who’ve flown the nest. Enter Mike (Thewlis), an old friend of Jane who turns up in her  acquaintance of Jane, who turns up in her psychiatrist’s waiting room. Mike is a musician and talks Jane into singing with him. But their budding romance goes off the rails when Nicola’s Lesley disappears,

To call Eternal Beauty tumultuous is an understatement. The characters are so overworked they feel like parodies of themselves with Jane’s illness is shown as a spectacle. Mental health sufferers are not ordinary people – they are pre-dominantly victims – but not so far removed from any normative person who can easily fall victim to any of the many afflictions of the mind. Craig and DoP Kit Fraser feast self-indulgently on special effects, shot on 35 mm film stock (Kodak Vision3), surrounding Jane with cyphers instead of real characters. Schizophrenia is many things – but not this version of a would-be horror movie. AS

IN CINEMAS FROM 2 OCTOBER 2020 | In Cinemas and On Demand