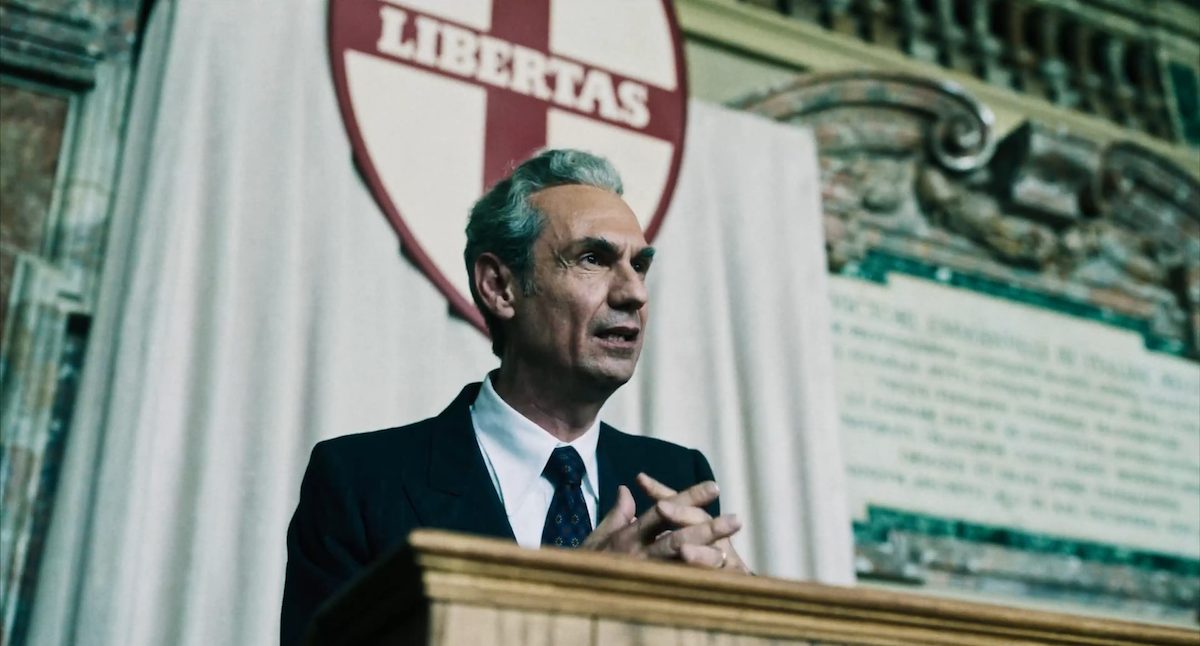 After Good Morning, Night, seasoned Italian director Marco Bellocchio turns his camera on the kidnapping and murder of Italian statesman Aldo Moro, experimenting for the first time with a broad-based serial narrative form to approach the multiple points of view of the main proponents and victims of that tragic period in Italian history.

A dour and classically styled political epic Esterno, Notte, unfolds in the tense and turbulent climate of 1978, in an Italy divided by civil war. The infamous Red Brigades, the principal armed organisation of the extreme left are locked in a battle with the State, and the narrative unfolds from the perspective of two RB partners in crime Valerio Morucci (Montesi) and Adriana Faranda (Marra) who are also lovers. After a brief domestic vignette that flips back to March 1976 the action moves onto the beach for a showcase shoot-out, the Red Brigades giving us an example of their ferocious firepower. Street violence, kidnappings, kneecappings, gunfights and murder attempts will erupt on the wide screen while behind closed doors intense internecine discussions offer insight.

Rich industrialists and their families are being tormented by kidnappings. For the first time in a country of the Western bloc, a government backed by the Communist Party (PCI) was about to take office in an epoch-making alliance with the historic conservative bulwark of the Nation: The Christian Democratic Party (DC).

Meanwhile Aldo Moro, the President of the DC (here played gamely by Fabrizio Gifuni) is the main proponent of the agreement marking a decisive step in the mutual recognition between Italy’s main parties. On 16 March 1978, on his way to Parliament Aldo Moro is kidnapped after an ambush in which his entire police escort is massacred. It was a direct attack on the heart of the State. His imprisonment would last 55 days, marked by Moro’s letters and the communiqués of the Red Brigades: 55 days of hopes, fears, negotiations, failures, good intentions and bad moves. 55 days at the end of which his body was abandoned in a car in the centre of Rome, halfway between the headquarters of the two Parties, the DC and the PCI. This is a comprehensive and highly intelligent piece of filmmaking that will resonate with those who lived through the era and offer newcomers a valuable testament to an episode of nation’s gritty past.