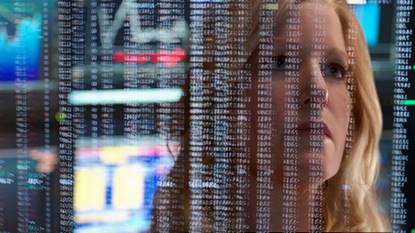 Director Meera Menon’s second feature, written by Amy Fox and co-produced by two of the leading stars, Sarah Megan Thomas and Alysia Reiner,  sees Wall Street as a shabby place of deceit and back-stabbing, but, unlike the Wolf of Wall Street (where women were just trophies), there is no hedonism involved – and the only substance abuse is a pregnant woman drinking a glass of wine. Women in the City are too busy fighting male discrimination to have time for self-indulgence and displays of grandeur. Whether they are better than the money men, is left open.

Senior investment banker Naomi Bishop (Anna Gunn) is preparing a new IPO for her company: Cachet. The brainchild of Ed (Roukin), the new social media site is bigger and much more secure than Facebook. But Naomi is suffering from the failure of her last IPO, and her boss Randall (Tergesen), is more interested in playing with his Jenga tower than the details of the operations. That said, he does not let forget her failure. In a place were innuendos and rumours are often more powerful than figures, the comment “Naomi brushed up the clients of her last deal the wrong way” is just code for “she is not flirty enough”.

But forty something home boxing fan Naomi is no lightweight, but bloody good at her job. It’s the company she keeps that contributes to her downfall: her part time lover, hedge-fund broker Michael Connor (Purefoy) seems to more interested in the Cachet deal than making love to Naomi. And – beware of deputies – Naomi’s second-in-command, Erin Manning (Thomas), feels wronged by her boss who denied her a promotion, and will do everything to get her revenge. Erin sees her pregnancy and wimpy boyfriend as a hindrance in her quest for success. Still, Naomi needs Erin to be nice to Randall, after a source revealed that Cachet might not be so secure as advertised. The third women involved is an old friend of Naomi’s, Samantha. Joggling a lesbian lover and twins in her spare time, she works for the Justice Department, earning a fraction of the remuneration paid in banking. After bagging a trader, Samantha is soon convinced that Michael is also involved in manipulating the opening price of the Cachet IPO. Naomi’s future – to take over the global leadership of the bank – is tied to the success of her IPO, which is in the hands of Erin and Samantha.

There are some entertaining scenes in Equity: when Naomi is stressed during a meeting, she sees another man munching the same cookies as she is – but his have more chocolate chips – she explodes, making him count the chips! And when hedge-fund broker Michael passes on a tip about Cachet to a dealer, the information is hidden in a toy hedgehog. Equity offers a new perspective on the world of high finance, but does not follow the rules of the classic finance thriller. Manipulation and treachery are just as rife amongst the She-Wolfs of Wall Street as with their male colleges. The ensemble acting is admirable, with Gunn stealing the show. DoP Eric Lin images creates a hard-edged and cold-hearted environment overloaded with tacky art bought as an investment rather than an adornment. Naomi’s catch-phrase is ‘Money is not a dirty word.’ AS

OUT ON GENERAL RELEASE FROM 2 SEPTEMBER 2016