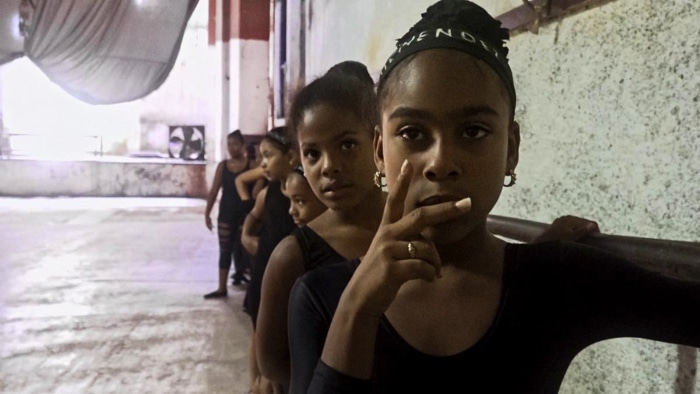 This new documentary portrait of Cuba from Oscar nominated Hubert Sauper explores the post-Castro era pairing everyday life with an essay on the power and myth-making in cinema. Through his conversation with children, a sex worker and an actress, he shows a Cuba still dependent on tourism, even though some of the values are contrary to the revolutionary movement of “26th of July”.

Ten year-old Leonelis Arango Salas is the star of the show: she explained the 1902 “Tafft Agreement”, which gave the USA the use of the naval base of Guantanamo (!), one of over 900 military bases worldwide, where the American flag is raised, including the Moon. She also elaborates on the sinking of the battleship USS Maine by the Spanish – in reality, the ship sunk because of an explosion in the boiler room but the US used the incident to shoot reels of film showing their soldiers killing Spanish troops who had occupied Cuba for centuries. The boy also shows us the sinking of the ‘Maine’, restaged in a bath tub with lots of cigar smoke. Theodore Roosevelt’s “Rough Riders”, soldiers who fought on behalf of USA in the Cuban War of Independence, were very much ‘Trojan’ horses only interested in replacing the Spanish. And the cinema covered the myth: Media Tycoon Randolph Hearts (on whom the hero of Citizen Kane was modelled) wrote to Roosevelt: “You furnish the war, we furnish the information”.

A sex worker is, not surprisingly extremely disillusioned, regales us with the revelation that all US presidents look the same, be it T. Roosevelt or Trump: “Faces of people who like war and wealth.” Tourists come here for sex, men or women: “Gringas come here looking for black dicks”. And in her own experience, sex workers are just like slave: “I am a piece of meat, when they say do it doggy-style, I go “wow wow”. But she still wants to go to Disneyland and meet Brad Pitt.

In one of the few modern malls, Leonelis and her friends admire a pencil, costing over 2000 US dollars. Her hospital worker grandmother earns just four dollars a week. Even with Sauper’s help, they cannot calculate how long she would have to work to buy this simple writing instrument. Hans Helmut Ludwig, a middle aged tourist from Bavaria, visits a ballet school where he claims the free tuition is very professional. He compares Cuba today with a theatre set: tourists come to participate in a parallel universe full of illusions which will soon disappear. A utopia, never realised.

A street fight between a young girl and her mother is a brutal spectacle. Later we see mother and daughter watching Chaplin in The Great Dictator. “This is my grandfather” the girl tells Sauper. “You are Hitler’s granddaughter?” The girl can not stop giggling: “I am Charlie’s granddaughter”. Her mother, Oona Castilla Chaplin looks calm and collected as she accompanies her daughter and friends on the guitar,.

Epicentro is about reality and film, utopia and dystopia, and the American dream, with its “corrupted ideals and success forged in lies”. Like Robert Altman’s’ Buffalo Bill and the Indians, the truth is not welcome, particularly during the 200 year celebrations. Sauper hits hard, as he did in We Come as Friends when the Sudanese people complain “even the Moon belongs to the white man”. Maintaining a freewheeling and detached approach during his conversations on home-grown politics, the message is clear: Havana is anything but its translation: Heaven. AS