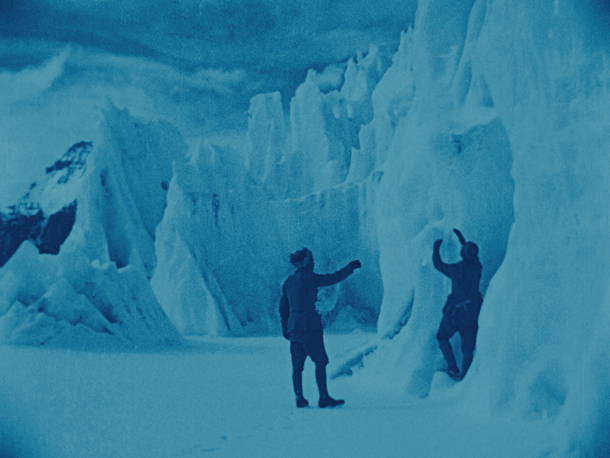 There’s a moment during The Epic of Everest that really reflects the powerless of human endeavour when faced with the magnitude of nature: As three tiny insect-like creatures totter over a snow-caked precipice of solid ice and gradually disappear from view, the total insignificance of man versus the mountain finally dawns. What sheer folly to think that these men could conquer a force of nature dressed flimsily in tweed jackets and plus fours almost 100 years ago but, of course, North Face puffas didn’t exist then. 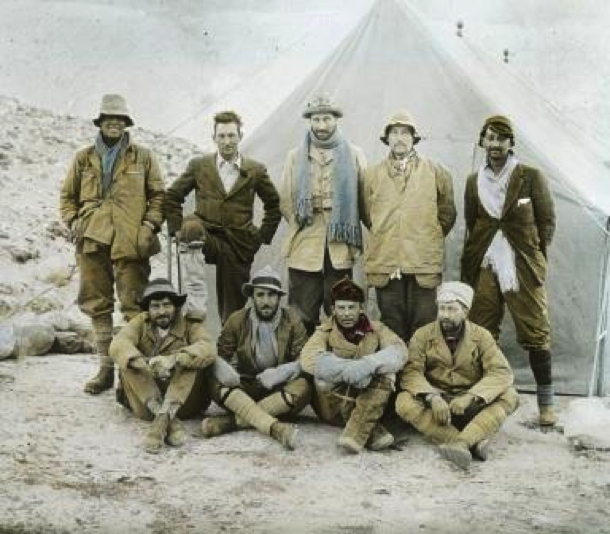 Captain John Noel accompanied Mallory and Irvine on this third attempt to conquer the magnificent Himalayan peak using the most powerful lenses of the day to produce jaw-dropping photos and ethereal time-lapse sequences that are testament not only to the dangers of the snowscape but also the spiritual splendour of this deeply spiritual part of the world. To add context, Noel captures footage of the megalith of Rongbuk monastery (where they are told that the expedition is fated not to succeed) and the local people of the world’s highest town: Phari-Dzong, who never wash from birth to the day they die, when they are ‘hacked to pieces’ on a slab of stone. They seem cheerful enough.

Despite restoration by the BFI National Archive, the photography naturally feels dated in comparison with recent mountaineering films such as Chasing Ice and The Summit but what Captain John Noel has captured here is the extreme sense of loneliness and isolation of the vast expanses. Filming the lead party up to two miles away, thanks to the clarity of visibility, they look like tiny dots on a hostile landscape often shrouded in swirling mists and eerie legends of local Tibetan folklore.

Heights mean nothing to those of us who stay happily at sea level, but when we hear that sherpas carved up to 2,000 steps in the ice on some of the ascents, the extreme arduous nature of the expedition finally hits home. On the day of his birth, a tiny donkey was forced to walk 22 miles and collapsed in sheer, sleepy exhaustion after his first day of life. These bare facts really put this extraordinary venture into human context that can be appreciated.

The Epic of Everest is accompanied by Simon Fisher Turner’s atmospheric ambient soundtrack featuring cowbells, Tibetan music and vocals gradually turning more sinister and haunting as the expedition unfolds. A moving and peaceful tribute to our courageous men. MT

THE EPIC OF EVEREST IS NOW free ON BFI PLAYER marking TO THE ENDS OF THE EARTH: EXPLORATION AND ENDURANCE ON FILM.

Journey across the planet’s most challenging terrain in this ode to exploration and endurance on film, accompanying TO THE ENDS OF THE EARTH: EXPLORATION AND ENDURANCE ON FILM, season at BFI Southbank continuing throughout January.

On 5 January 1922 the ‘heroic age’ of Antarctic exploration drew to a symbolic close with the death of Anglo-Irish explorer Sir Ernest Shackleton. Marking this centenary and that of Britain’s first attempt to summit Mount Everest, this collection tells a connected story about human endurance, our relationship with and impact on the natural world. The birth of film collided with exploration’s heyday as a competitive sport, source of national pride and beacon of scientific discovery. This free curated archive collection includes early film records of expeditions to Everest and the Arctic and beyond to remote regions of South America and South Asia. Many of the films are part of the extraordinary Royal Geographical Society collection, preserved by the BFI National Archive.