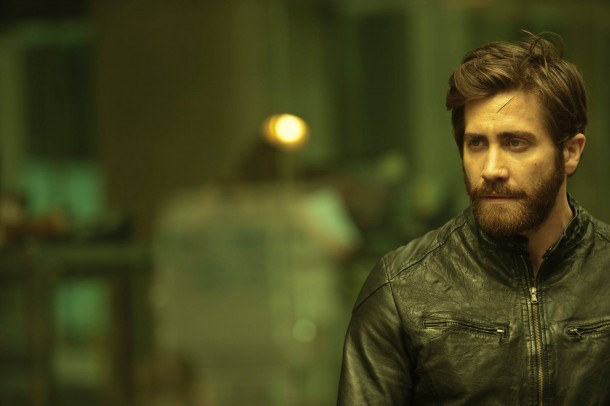 Based on the novel “The Double” by Portuguese Nobel-Prize winning author Jose Saramago, ENEMY suffers greatly from its transfer from Portugal to the soulless concrete jungle of Toronto – Saramagos’ magic realism simply does not work well in a cold, detached and purely functional environment. Director Denis Villeneuve, whose films include the brilliant INCENDIES (2011), tried to counteract the atmospheric deficit by creating a mostly depopulated background, his protagonists seem to live in a vacuum, creating an eerie and enigmatic feeling – but it does not help the audience to grasp the undercurrents of the narrative.

University lecturer Adam (Gyllenhaal) and his girl friend Mary (Laurent) live out the last weeks of their relationship, Adam is getting more and more distant from her, their sex life is unsatisfactory. One day, Adam sees a feature film, and discovers, that one of the minor actors looks exactly like him. Intrigued, Adam tracks Anthony (played again by Gyllenhaal) down, who is living with his pregnant wife Helen (Gadon) in a high rise block. Their meeting is confrontational and Adam loses even more control of his life in spite of visiting his dominant mother (Rossellini), who simply tells him to forget all about his ‘Doppelgänger’. Finally, Anthony, who suspects that Adam has slept with his wife, put the pressure on Adam as a violent and bewildering denouement unspools.

Apart from the magic symbolism, which seems totally out of context with the rest of the rather banal realism of the narrative, Gyllenhaal is the main reason why ENEMY is far less effective than the original novel: he is simply unable to be authentic, particularly his portrait of the paranoid Adam, following his prey on a motorcycle with a visor reminiscent of “Spiderman”, is more caricature than anything else. Like the film itself, he does not convey the dark undercurrents of his personalities. Laurent’s Mary, and Gadon’s Helen are pushed aside to the margins, not much more than cyphers, the same goes for Rosselini. Whilst Nicolas Bolduc’s camerawork tries hard to make Toronto look like a background for Saramagos’ novel, it only succeeds somehow in misleading the audience: the ensuing drama is not rooted in outside oddities, but in the head of the main protagonist. ENEMY is serious and worthy, but it fails far more than the average literary adaptation to translate the page into an equally powerful cinema experience. AS

OUT ON GENERAL RELEASE FROM 2 JANUARY 2015