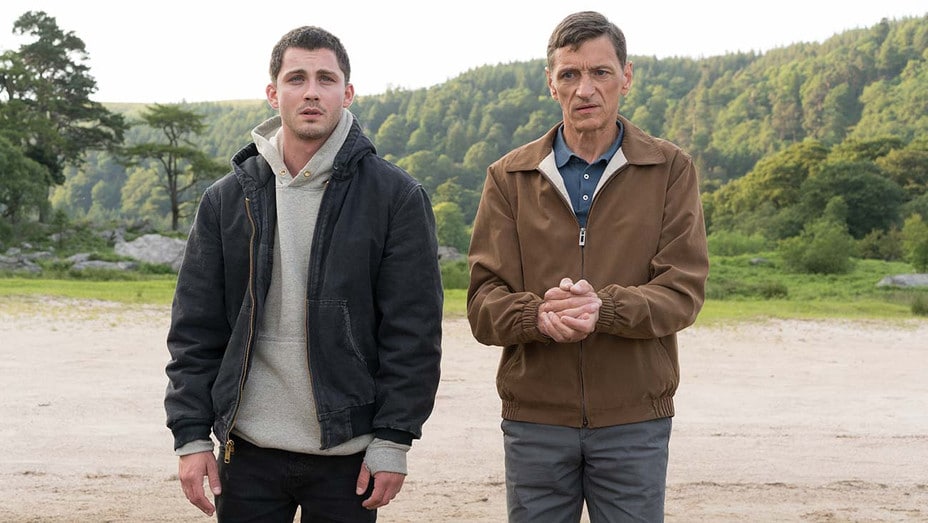 There’s a dicey moment in the opening scenes of this road movie when a grieving husband nearly drops his wife’s ashes on the way back from her funeral in small-town Alabama. This is one of the lighter moments in Michael Armbruster’s tragicomic script that takes the edge off a bitterly violent reunion between likeable father Frank (Johan Hawkes) and his bullying son Sean (Logan Lerman).

Anna’s dying wish was that her husband and their ex-con son would scatter her remains back home in Ireland near her favourite lake. The casket of ashes will become the MacGuffin providing some humorous plot twists in this father and son journey that starts in the Southern States and ends in County Wicklow, the American spiritual home.

We see Sean checking out of a correctional facility where he has served time for crimes unknown. Frank has arrived to meet him only to be rudely rebuffed by the miscast felon, a hardened brute who clearly hates his dad, again, for reasons unknown.

But Frank finally persuades him to go on the trip to Ireland in the hope of burying the hatchet, along with the casket. Once in Dublin there’s no peace for the grieving Frank, Sean giving him an impromptu battering before heading for the hotel bar. He soon takes up with Jewel (Bolger), a savvy call girl who also knows a thing or two about spark plugs, clearly she’s no dumb blonde, just a rather one-dimensional one.

Soon they’re snogging in the carpark, Sean promptly throwing up all over the hire car’s velour seats. It doesn’t take us long to realise that the only good guy on this ‘road to redemption’ is Frank. Sean – his polar opposite – is somehow miscast in a role which has no backstory to give ballast to his fall from grace. Jewel will turn out to be a hollow hooker, minus the heart of gold.

We know exactly what will happen in End of Sentence, John Hawkes making it all watchable with his subtle take on grief. Upbeat for the most part, and lushly photographed in Southern Ireland, the sentimental final scene and earnest score is what you’d expect for a film pitched at an American audience where it premiered at this year’s Sundance Film Festival. MT