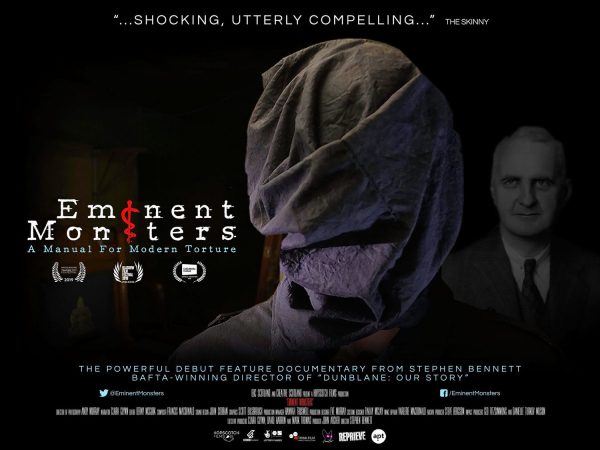 In 2020 the UN Special Reporter on Torture, Prof Nils Melzer, publishes a dossier on psychological torture to the UN Human Rights Council. Prof Melzer cites Eminent Monsters as being a key motivation in his research.

Scottish born psychologist Dr Ewen Cameron (1901-1967) first came under scrutiny during the Nuremberg trials, where he and two colleagues were invited to investigate the mind of Hitler’s Deputy, Rudolf Hess, who was later sentenced to a life sentence. This seems absurdly ironic, considering Cameron’s next step in the 1950s was to set up a treatment programme of Sensory Deprivation for his patients, which included enforced comas, LSD injections and “sleep cures”. These either deprived patients of sleep, or forced them to sleep much longer than needed. The programme was called MKULTRA Subproject 68 and was financed by the CIA and the Canadian government in Dr Cameron’s Allan Memorial Institute. The results were later published as Kubark Counter Intelligence Interrogation Manual.

Surviving relatives of Cameron’s private patients describe the victims of his therapies as “having completely lost their personalities”. Val Orlivow’s husband had to sell their house, Cameron insisting on her need for more private and expensive therapy. At a secret meeting in 1957, a British representative of the MOD, a scientist from the Canadian Defence Board and the co-ordinator Donald Heather, met to publish a paper for the CIA based on Cameron’s research to assist the US government in training soldiers to resist torture by their communist captors. Students were used as guinea pigs in the re-enaction. NKUltra, another name for Cameron’s study, was then used to interrogate communist soldiers and agents. The total cost of the programme was over a million dollars, literally in the name of  torture – although it would help to win the Cold War.

In 1963, KUBARK became the fully fledged ‘go to’ psychological torture manual of the CIA. The British Army used the techniques, complete with horrendous helicopter noises, strobe lights and a special punishment for captured IRA prisoners (including Francis McGuigan, Liam Shannon and Brian Turley); it involved leaning against a wall. In 1971 the ROI took the UK to European Courts, accusing them of torture. In 1978 the court returned the verdict that the prisoners had not been tortured, “but their treatment had been inhuman and degrading”. The same verdict, by majority vote of six to one, was reached in 2017.

Thanks to whistle blower Dr Stephan Reisner, the practice of US torture in the interrogation centre in Guantanamo Bay and other secret sides all over the world had been revealed. The “Enhanced Interrogation Experience” included “waterboarding” and ‘special’ psychological terror. One of the Guantanamo prisoners, who was released after 14 years without  a charge, remembers that the CIA put a continuously screaming woman next door to his cell  The interrogators told him it was his wife, and they would rape her if he refused to confess. Moazam Begg, another prisoner on the Cuban island, wanted to be killed after the interrogators used their strategy of “demonstrated omnipotence” against him.

The American Psychologist Association (APA) played a poor part in all this, whitewashing their members, who had worked form the CIA. Even though there has been some sort of repudiation of the programme, one psychologist said “that we are one terrorist attempt away from a repeat of the torture interrogations”. Popular TV series like “24” have legitimised torture in the minds of the broad public.

Naomi Klein can be quoted that “MK Ultra was not about mind control and brainwashing, but a design for a scientifically based system for extracting information from ‘resistant’ sources. It laid the scientific foundations for the CIA’s two-stage psychological torture method”. The 1978 and 2017 verdicts of the European Court of Human rights have legitimised these techniques.

Eminent Monsters starts with Ronald Reagan’s voice over on one of his pictures, where he warns us in this film that ‘the baddies will prevail’. How right he was – for once. AS