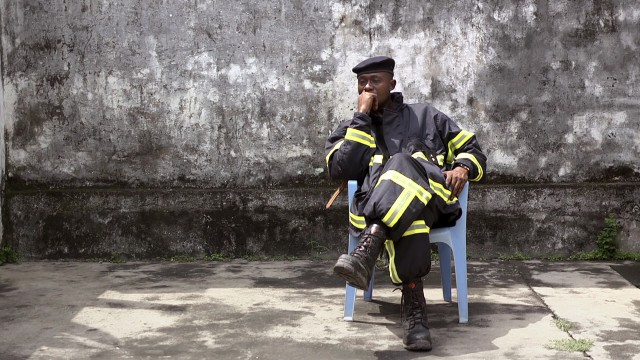 Kristof Bilsen’s first full-length documentary is a poetic and languid portrait of civil service workers in Kinshasa (DRC), the third biggest city in Africa. After decades of post-colonial strife and civil wars the Democratic Republic of Congo (formerly Zaire) has somehow come to a grinding halt. In the capital Kinshasa we witness members of the essential services fighting a losing war against an all-prevalent apathy. Henrietta works for the post office, a huge building, which seems very empty. Staff are faced to with long delays in wage payment; they are behind by more than a year and when the pay finally appears employees are lucky to get ten per cent of their monthly income.

One employee, Henrietta, tries to come to terms with sub-standard living condition, and the non-existing public transport which means miles of walking just to get to work. Finally, the deputy prime minister re-opens the post office, computers are installed – Henrietta is learning fast – and everyone is optimistic. A few weeks later, we meet Henrietta again, she is in charge of her local post office, but no customers appear.

Simon and Van Nzai are two old friends, working for the railway station. But we don’t actually see a train until the very last scene, and the two men are bored and conspiring against each other. Nzai tries to get early retirement, because his eye sight is failing him during the night shifts (so he claims), whilst Simon tries to repair an old, clapped out car, to make some money as a taxi driver. Finally, there is Lt. Kasunga and his firemen form the Central unit in Kinshasa. Kasunga knows very well that a huge city like Kinshasa needs six district stations and a central station, and his small unit is hardly able to cope. When a house is on fire, the men are helpless: the water pressure is much too low, and we see the flames destroying everything. It is ironic, but not surprising, that the building of the Central station was itself destroyed by fire two years ago, after an accident with a stove. Colonial attitudes have survived: Simon tells us that the black bosses repress the workers in the same way as the colonial masters, and independent thinking, never mind critique, is not opportune, if one wants to keep their job.

Bilsen, who is also the DOP, shows a cosmos of slow motion, where everybody seems to stay still, food is rare and basic, and equipment seems to be from the 19th century; boots, like the ones of the fire brigade are second hand from Canada. Hope (and faith in the case of Christian, Henrietta) are still alive, but passivity nevertheless gets the upper hand. Without being judgemental, Bilsen is showing us a life of just survival, but in spite of this, the images are sensitive, lyrical and very touching. AS

The film’s UK premier will play on Saturday 4th July as part of the East End Film Festival: www.genesiscinema.co.uk/films/events/eeff-elephants-dream-uk-premiere-sat-4th-july/