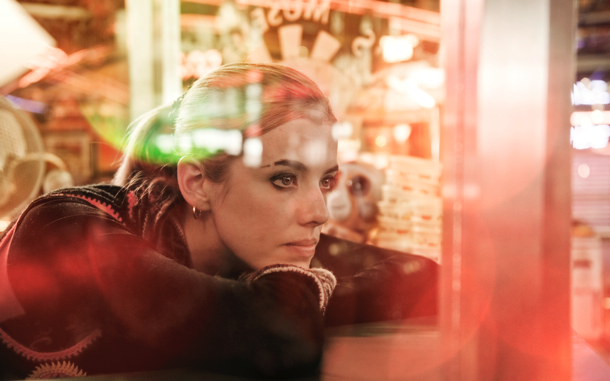 Urban road movie, ELECTRICITY, is a poignant and spirited exploration of epilepsy. Agyness Deyn gives a dynamite peformance as, Lily, a young woman living with the condition. Deyn (Pusher) has recently inherited some cash from her mother. Emboldened by the legacy, she sets off on a journey of discovery to track down her estranged younger brother in Lond.

This is Deyn’s debut in a starring role and the narrative is played out through Lily’s eyes as she lives, day by day, with the condition. We first meet her getting ready for a date in her hometown of Redcar, Cleveland. Pretty, blond and bubbly, her excitement builds and then crashes: we experience the surreal effects of an approaching fit that sends her crashing headlong onto the pavement in full view of passers-by.  Immediately we empathise with her feelings of fear, disappointment, embarrassment and anger as her condition threatens to ruin yet another chance to enjoy a normal life. Through Lily, we enter the horrific world of epilepsy: a life full of apprehension, fear, pain, disfigurement, and ultimately a life lived through doctors, hospitals and drug regimes.

But this only the physical side. In a performance of sparky vulnerability, Deyn shows how Lily’s background has contributed to her problems in personal relationships. Gradually it emerges that her mother (who we never meet) was unable to cope with her vulnerable child, so Lily grows into a survivor. In London, her older brother, a chancer who hustles for a living through professional gambling, is a dominating and controlling influence. He is dead against sharing their inheritance with their younger more sensitive brother, so Lily is alone in her bid to track him down through the less salubrious parts of London, where her kind and friendly nature is taken advantage of by the usual round of users and wayfarers, until she finds an honest friend in Leonora Critchlow’s sympathetic Mel. To some extent Mel is a gift-horse and this is where the narrative stretches our imagination: why would an intelligent, hard-working woman such as Mel would have an unrented room in the middle of London? But Mel takes to Lily for reasons that gradually become plausible.

Bryn Higgins crafts a dramatic and intensely visual experience here, blending Si Bell’s imaginative cinematography with inspired touches of inventive imagery making this a watchable, even breath-taking drama. Combined with Deyn’s outstanding turn as Lily on her spiritual journey to regain her inner power makes ELECTRICITY an absorbing and, at times, heart-rending ride through unsettling territory. The camera loves Deyn from every angle; even when she beaten and bloodied in her hospital bed. Anchored by Joe Fisher’s screenplay, based on the novel by Ray Robinson. ELECTRICITY is not just a story about a struggling girl, it’s a soaring tribute to those that suffer the daily indignities of this disorientation condition, bringing their plight to a wider audience. MT