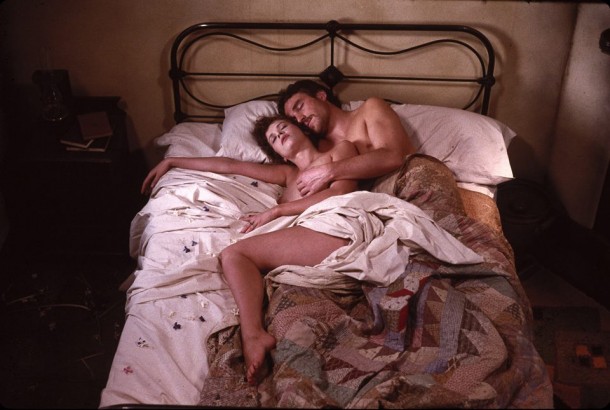 Mark Hartley (Machete Maidens unleashed) is no stranger to the weirder aspects of film history at the lower end of the spectrum, and ELECTRIC BOOGALOO certainly dives deep into the underbelly of the film industry – but coming up with a few contradictory facts regarding our perception of exploitation film making.

Cannon Films was founded in 1967, and, until the arrival of Menahem Golan and Yoram Globus in 1979, had produced mainly horror shockers like The Blood on Satan’s Claw. The cousins Golan and Globus would not change the contents of Cannon’s film slate very much (apart from a few exceptions mentioned later), but production values would compete, at certain times, with the ones of the major studios; whilst the duo’s production by numbers rose to eighteen in 1987, compared with the usual yearly output of the majors of six to eight.

Golan, who would direct some the films himself, was the artistic half, whilst Globus juggled the finances. Both had great success in Israel with Lemon Popsicle in 1978: produced for 10m Shekel, 1.3 million citizens (more than a third of the total population) watched the film, so did 2.7 million Germans. The teenage sex comedy was remade as a Cannon Film in 1982 with the title The Last American Virgin. The cousins were obviously led by the maxim that every film could only get better if naked women appeared frequently. With a few exceptions, these scenes were not offensively pornographic; more often than not, the nakedness was involuntarily funny. Lucinda Dickey and Bo Derek, commenting on their former selves in this documentary, can see the funny side of the embarrassing clips. Much more obscene were Michael Winner’s Death Wish sequels, which, so one observer, “simply served the purpose for Winner to be obnoxious”.

On the whole, Globus/Golan found work for stars whose career was on the downward trajectory: actors like Elliot Gould or Franco Nero, the latter having the honour to be first Ninja in Enter the Ninja (1980). Directors, who had seen better days included Justin Jacklin of ‘Emmanuelle’ fame, Barbet Schroeder (Barfly, 1987), John Frankenheimer (52 Pick Up, 1986) and Tobe Hooper, whose Lifeforce (1985) was the ultimate ‘zombie-vampire-end of the world-nude movie – starring a very young Mathilda May, a B-picture produced at the staggering cost of 25m $, easily 40 m in todays money. But it should be said, that some exceptions made these excesses easier to bear: Jean-Luc Godard’s King Lear (1987), John Cassavates Love Streams (1984), Neil Jordan’s Company of Wolves (1985) and Andrei Konchalovski’s Runaway Train from the same year show a different side of Cannon. The same goes for Franco Zeffirelli’s Verdi opera Otello (1986), the director, not the easiest to work with, stating rather surprisingly, “that Golan and Globus were the best producers he ever worked for”.

What brought the end for the Golan/Globus reign at Cannon was the fact, that they grew too quickly. At one time, Golan/Globus had over 50% of the UK cinema market with their “Classic” and “ABC” chains; on top they had acquired EMI, with their library of over 2000 films, and the studios in Elstree. This was all sold, to make even bigger films, like Superman IV (1987), a disaster with the worst special effects possible. Cannon than paid Sylvester Stalone the unheard sum of 12 m in the same year, to appear in Over the Top, an arm wrestling (sic!) ‘action’ film, which bombed at the box office. At the same time, Cannon had a five year option with “marvel’ for Spiderman, the rights reverted after five years back to Marvel, later to be picked up by Columbia, But after his ‘divorce’ from Cannon and Globus in 1989, Menachem Golan produced Captain America for Marvel and his new company ’21 Century’ – alas, the ten million $ project went more or less straight to video.

The parting of Golan (who died in 2014 at the age of eighty five) and Globus was bitter; on March 16th, two Lambada films had their premiere in Hollywood, one produced by Globus for Cannon, the rival one by Golan for 21. Century. As somebody commented “this was even surreal for Hollywood standards”. And surreal is an apt description for the whole Cannon adventure, documented here informative, full of witty/bitchy remarks and clips which make you laugh in Hartley’s ELECTRIC BOOGALOO, the title of a1985 Cannon film, the sequel to another, rather successful, Cannon classic Breakin. AS