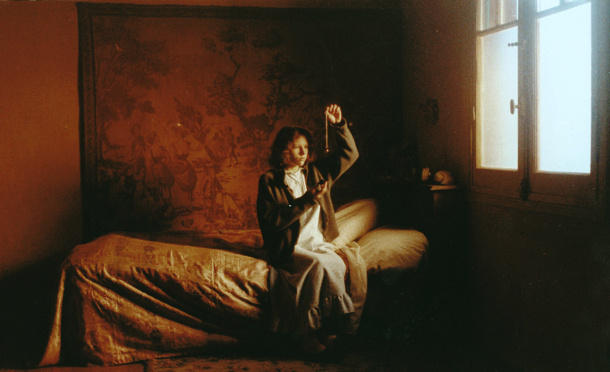 Enigmatic and soulful, El Sur reveals its slow-burning narrative as tentatively as sunrise on a winter’s day. In the opening scenes, a young girl gradually awakens in the penumbral darkness of her room to realise that her life has changed forever, as the film unspools, the memories of her childhood play out and gently crystallise into this moment of wistful sadness when all that has gone before suddenly become clear in the exquisite metaphoric dawn. This is a rare and subtly nuanced study of a father daughter relationship.

Victor Erice’s painterly depiction of Spain in the 1950s expresses the conflict of Civil War through a domestic tragedy that takes place in the family’s ‘chalet’ in the Logrono countryside near Madrid. The South and Seville is imagined as a sultry El Dorado of movie stars and exotica. It is also the birthplace of young Estrella’s father (Omero Antonutti) who in turn dreams of a glamorous starlet Irene Rios (Aurore Clement) whose name Estrella finds scribbled in his bookcase in the sequestered antic of their home.

Estrella, played as a child by Sonsoles Aranguren and a teenager ny Icíar Bollaín, tries to understand the adult world around her which is fiercely traditional one held under the of General Franco’s rule, where women stay timidly in denial at home and men got on with being men. “I grew up more or less like everyone else, getting used to being alone and not thinking too much about happiness.” But Estrella forms a charismatic bond with her father, feeling more compatible with him than her straight-laced mother, and the two share a rich interior life of reverie against the backcloth of their dank and dismal provincial life.

Victor Erice’s EL Sur is an elegantly understated drama about childhood that actually benefits from its modest running time of 97 minutes although the director had hoped to create a lengthier film envisioned a lengthier venture and got the Stroheim treatment, the half that remains is nevertheless exquisitely lucid and tender about childhood’s shifting emotional spaces. The drama is soberly shot in burnt ocres and muddy browns synonymous with Franco’s grim regime and the starkness of Northern Spanish winters Erice but spices up this cold terrain with sensuous moments: cognac and cigars in the Gran Hotel, a pasa doble plays at a wedding; and Film Noir posters in the local cinema that capture the imagination and beckon Estrella to a life beyond her lonely childhood. MT