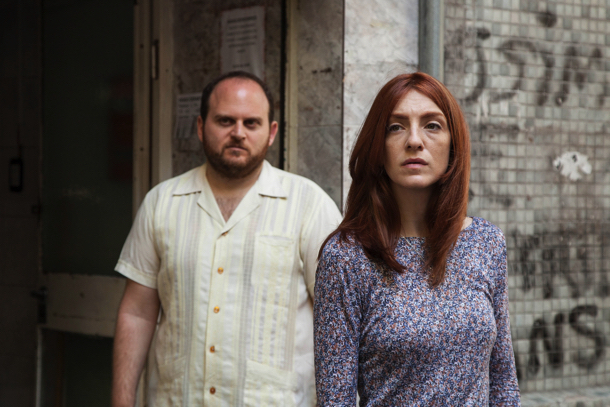 In Daniel Burman’s upbeat rites of passage drama EL REY DEL ONCE, Alan Sabbagh plays a typical put-upon Jewish softie returning home to Buenos Aires in the hope of reconnecting with his ageing father. Ariel emigrated to New York and in the intervening years his father Usher has founded a charity foundation in Once, the city’s Jewish district where Ariel spent his youth. But Ariel’s dreams of a father son reunion are drowned in the cacophony of demanding duties that Usher ropes him into while keeping a distinctly low profile himself.

Burman’s film brilliantly conjurs up the close and often stifling nature of the orthodox Jewish community and Once looks very much like old districts of Tel Aviv. The friendly openness of the people and their paranoia and hypochondria seeps through the narrative but also their endless support of one another. In Buenos Aires, everyone is talking and no one’s listening and Ariel feels desperate for a real connection. He’s drawn to Eva, a charity volunteer who also feels cut off from her family. Eva’s strength lies in her silent radiance. An orthodox girl, she nurtures Ariel with home cooking and the precious gift of listening while he reflects on his troubled soul and slowly, unwittingly, he falls in love.

With endless phonecalls from his girlfriend back home creating an oppressive claustrophobia, Ariel re-examines his life. Eva becomes jealous and after submerging herself in the mikveh, (a purifying bath often taken after a period) the two end up in bed and conversation flows for the first time. EL REY DEL ONCE is told as a straightforward narrative; the final act brings a happy ending but not a surprising one as Ariel volunteers to sit shivah as the tenth, vital man at a local funeral.

This is Daniel Burman’s third film at Berlinale where he once more explores the father son dynamic with a lightness of touch that is occasionally moving. As Ariel moves from darkness to light towards his inner strength, he finds himself at the centre of a community where he rightly belongs. Burman’s previous films at Berlin were El abrazo Partido (in Competition in 2004) and Derecho de familia (in Panorama in 2006). MT