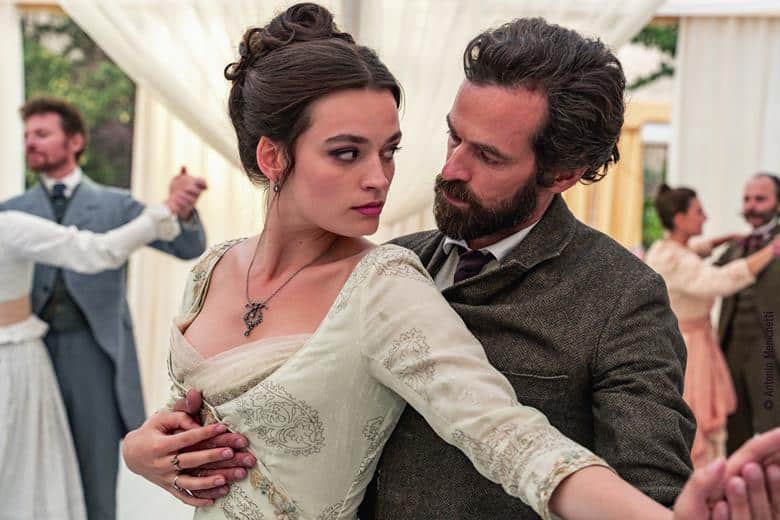 Martin Bourboulon’s elegant and ravishingly realised historical drama also goes by the amusing title of Eiffel in Love and sees the pioneering engineer who designed the iconic symbol of the city of Paris as a disillusioned romantic and national hero played dashingly here by Romain Duris.

In March 1889 Gustave Eiffel is sketching away at his drawing board way in the rooftops of Paris proud in the knowledge that his completed edifice, built for the ‘Exhibition Universelle’, had impressed everyone with its stature and daring design representing France’s return to power and industry after an era of ‘blood and tears’. A cutaway shows him receiving an American award for his framework design for the Statue of Liberty, three years previously, in 1886.

Now a household name, Eiffel feels a sense of professional achievement; the brief was to build a democratic monument that everyone could see: worker, child and aristocrat. It had been an ambitious and controversial undertaking based on Eiffel’s ingenious sand-based system, but dogged by setbacks, worker disputes and anger from local residents due to the disruption and enormity of the perilous building process, pictured in Matias Boucard’s majestic widescreen images.


The sumptuous social settings of his upper bourgeois circle of friends are overshadowed by a tumultuous and bittersweet private life revealing the engineer as a deeply sensual man, a proud father and widower – but destined to be unhappy in love. An early coup de foudre with the young seductrice and socialite Adrienne Bourges (the darkly attractive Emma Mackey) who he calls “spoilt” but soon impregnates, comes to an end when her father declares Eiffel ‘socially unsuitable’. So she goes on to marry his friend, the wealthy and influential Antoine de Restac (Deladonchamps) who supports Eiffel’s controversial tower scheme. His torrid love affair with Adrienne is then rekindled and runs throughout the film as a bittersweet motif in the rather choppy five-handed screenplay.

Some may see this slickly realised social drama as a unique tribute to France’s 19th century industrial power, trivialised by the doomed love story at its heart. Others may find the romantic interludes flesh out the maverick engineer’s backstory and add emotional freight and tension to the awe-inspiring construction procedural that gradually gains momentum through the sheer human endeavour that built a ‘staircase to infinity’ soaring 300 metres high over the rooftops of Paris, the tallest man-made edifice at the time. Despite its structural flaws – and whichever way you see it –  Eiffel is an enjoyable and fitting homage to a man who was creative, romantic and cerebral. Certainly a hero to be celebrated.  MT

ON RELEASE IN UK and IRISH CINEMAS from 12 August 2022