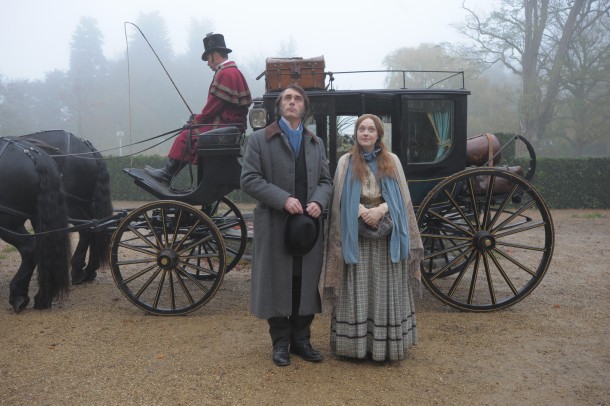 The name of John Ruskin is nowadays synonymous with socialist ideals and a College for educationally-challenged adults in Oxford. In Mike Leigh’s Mr Turner, Ruskin comes across as a sparky intellectual art critic but in Richard Laxton’s Effie Gray, he is something far more dark and sinister: a cowering narcissist with undercurrents of misogyny. Emma Thompson has written another winning script for this enjoyable slice of Victorian English social history, suffused with the intense colours, finely-detailed interiors and dramatic paintings of the pre-Raphaelite era. Dakota Fanning makes for a cool-headed and haunting heroine as Euphemia (Effie) Gray, a figure of purity and feminine empowerment. Betrothed in marriage to John Ruskin (Greg Wise) from an early age, she goes like a lamb to the slaughter from her impoverished Scottish home to Ruskins’ family villa in South London, presided over by his severe and suffocating mother (a beady-eyed Julie Walters) and draconian father (a saturnine John Suchet).

Despite her initial joy at joining a wealthy and respectable family, all is not well. Hothoused by his strict parents since childhood, Greg Wise’s Ruskin emerges an impotent loner, despite his affable public persona. After a disastrous wedding night, Effie descends into despair; emotionally sickened by the strictures of this tightly-regimented Victorian household. Emma Thompson steals the show as the elegant and vivacious patron of the Arts Lady Eastlake. With her handsome husband Sir Charles, she provides upbeat contrast to the deeply dysfunctional Ruskins, and a supportive shoulder to cry on for the beleaguered Effie.

The stifling scenes at the Ruskins are lightened by luminous appearances where Lady Eastwick lends maternal support and a magical trip to Venice where Claudia Cardinale and Riccardo Scarmarcio play host to the newlyweds, as Viscountess and Rafael, in a dreamlike sequence of masqued balls and midnight escapades. While Ruskin stays firmly behind closed doors in their Venetian Palazzo, Effie falls for Rafael’s sultry charms in an episode that sparks a growing sexual obsession in the young woman who is clearly desperate for some action between the sheets but also acutely aware of her social position, staying faithful to Ruskin despite the obvious temptations of the exotic interlude.

When pre-Raphaelite’s artist Everett Milais is commissioned to paint Ruskin, the trio head to the Highlands where Millais and Effie grow close as Ruskin recedes into his work in the croft, between sittings. As Millais, Tom Sturridge gives a gently stirring portrait of the tortured artist who reaches out to Effie’s plight. Best known for his TV work on Eastenders and The Inspector Lynley Mysteries, director Richard Laxton’s grim portrait of Victorian England at the height of the Empire and the nadir of womens’ rights is watchable and immersive, probing Ruskin’s remarkable story with intelligence and insight. Dakota Fanning’s compelling performance as Effie shows a determination to overcome her desperate situation in this touching take on repression and redemption. MT