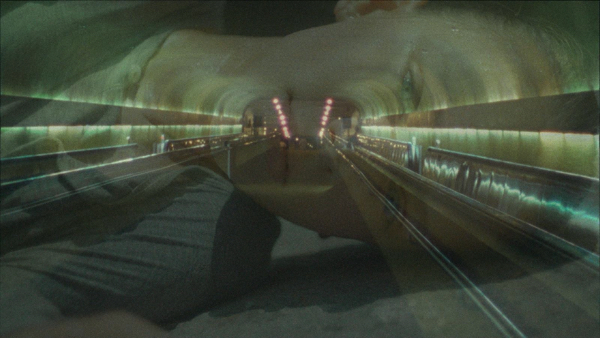 First time Brazilian director and co-writer Moara Passoni has used her teenage experiences with anorexia to create a luminous and inspiring self-portrait. Casting actors, who neither talk nor interact, the voice-over explores the deep despair she experienced via a character called Clara. The imaginative images by DoP Janice D’Avila imbue this with an otherworldly atmosphere where Clara is at the same time object and subject of her imagined reality.

We first meet Clara before she is born, her pregnant mother taking part in a demonstration: “Clearly adrenaline has a bitter taste for a foetus”. But she wills herself to come out into the world. The narrative flips forward to her teenage years, the already emaciated Clara (Valares) running as if her life depended on it – which in a way is true. Revisiting her early childhood, when she and her mother are stopped by the police, Clara senses danger declaring: “As long as I keep an eye on my mother, nothing will happen to her. I can handle it”.

Soon afterwards her mother is elected a member of Parliament and they move to Brasilia. Clara gets lost in the Parliament building: “The maze swallowed my Mum.” There follows the usual experiences of teenage-hood including her first Catholic communion. Sexual exploration sees her ostracised by class mates and teachers for kissing her friend Maria on the lips. This puts an end to her religious education, and she starts full-time ballet classes, her story temporarily taken over by a young woman emerging from a school and explaining to passers-by “A girl collapsed right in front of me, like an apple from the tree”. That girl was Clara.

She then enters a surreal state of mind, imagining speaking to the dictator, whom she calls Egg. We learn her full name: Clara Beatriz Costa Rosetti. Obsessing over her nutrition, she imagines her food is sometimes mind-altering: “My mum is not allowed to touch my food. I have no doubt that she smuggles in calories.” As her anorexia worsen she exclaims “my arms and legs weigh a ton. Why can’t I have food for the soul, that leaves the body and flesh to one side”. The ballet teacher warns her: “If you don’t start eating, I won’t allow you to dance again”. By now Clara is so weak she starts to hallucinate, imagining her mother’s disembodied voice and her friends floating through the air, “as if they were nothing but bones”.

Falling into unconsciousness, she undergoes tests in hospital and is prescribed various forms of treatment: Lithium against depression, and electric shock therapy. The doctors warn her about her impending death, medical notes stating clearly: “Patient Clara, 15, was found semi-conscious. She weighed 29 kilo, her body temperature is 33 degrees. Her pulse is 33 per minute”. Creative exploration leads to a turning point in her life, a positive step forward in all the negativity.

Passoni was inspired by the works of Marguerite Duras. She has the same the passionate intensity as the French writer, creating a hell of her own making. Ecstasy is not easy to watch, there is so much pain, and self-destruction. But the intensity of the obsessional emotions has the audience riveted, sometimes against their will. AS