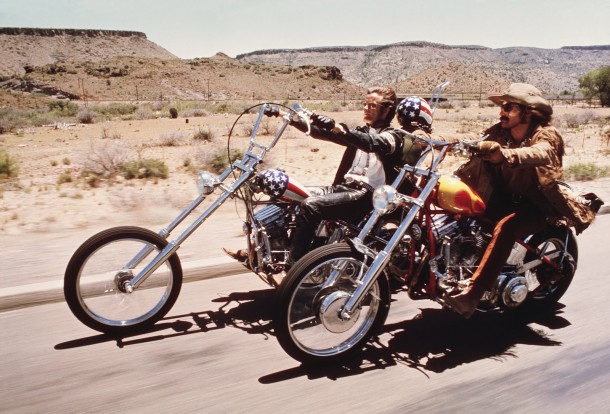 Taking its name from a Bob Dylan number EASY RIDER is the ultimate road movie where two hippies journey across South Western America in a bid to discover themselves and freedom (“What the hell is wrong with freedom? That’s what it’s all about”). What starts as an easy-riding peaceful mission in the spirit of Woodstock, rather than the menace associated with the lawless hoodlum biker gangs of the ’60s, EASY RIDER is not entirely devoid of tragedy by the time the dudes roll into their destination of New Orleans.

Peter Fonda rocks a ‘stars and stripes’ jacket and rides a classic long-barrelled motorbike. While Dennis Hopper opts for the Native American look with tasselled buckskins, full moustache and hippy hair. Gliding through big country landscapes, canyons and mountain ranges they enjoy hospitality where they can, teaming up Jack Nicholson, as a loquacious, well-heeled but naive alcoholic, who joins them on their trip but sadly bites the dust when the trio hit more hostile terrain. The journey includes a visit to a whorehouse where the pair indulge in grass and LSD, all shot in 16m. Hopper’s direction is for the most part fluid and the script trenchant in its depiction of gratuitous violence that occasionally takes on a poetic twist.

The upshot? A visually sumptuous and enjoyable romp that hints at philosophy and folklore, engaging cult and new audiences alike with its musical backdrop redolent of a freeweelin’ America of the ’60s. MT

NOW OUT ON BLU-RAY, DVD AT THE NEW LAUNCHED CRITERION UK LABEL