Writer: Maria Karlsson  From the novel by Jens Lapidus

The first part of Daniel Espinosa’s catchily titled Snabba Cash (Easy Money) throbs with brutal energy from its impressive opening sequence to the bitter end.  The Swedish-based crime thriller (from the book by Jens Lapidus), put him on the map and launched the big screen career of Swedish actor Joel Kinnaman. Some of the original cast join helmer Babak Najafi’s sequel that elaborates the story, cuts the running time,  but loses some of the original’s stylish edgy velocity. 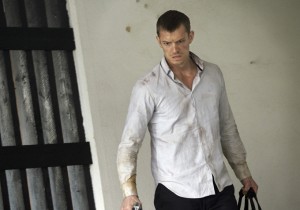 In EASY MONEY I, business student turned coke smuggler, JW, (Kinnaman) was heading for jail after a drug conviction. Three years later he’s institutionalised with the crippled Mrado, (shot in the closing moments) whose relationship with his little girl seems increasingly dreamlike.  During the time inside, the two crims have buried the hatchet and formed a strong bond. In a bid to return to an honest living, Joel has developed trading software, attracting potential investors. Mahmoud (Fares Fares) is in debt to Serbian gang leader Radovan (Dejan Cukic), while Jorge (Matias Varela), also involved with Radovan, is working another potentially lucrative drugs deal worth 10 million.  The love interest this time around switches from JW’s posh Swedish blond, Sophie (Lisa Henni) who’s given him the boot, to Jorge’s budding crush with one of Radovan’s prostitutes Nadja (Madeleine Martin). And when JW discovers that his well-healed ex-colleague and poker partner Nippe (Joel Spira) has stolen his software idea, a recidivist life with Mrado seems to be the only thing now on the cards.

In the hands on Babak Nataji, this thickly-plotted second part (there’s a third coming up) is less believable and more given over to happenstance and stylised melodrama (a car crash that traps the booty in the boot, conspiring crims fetching up in adjacent locations); but also highly immersive in its exploration of Stockholm’s inter-racial underworld.

Nataji keeps the balls in the air and us on our toes reading the English subtitles and following the blood-soaked turmoil as it twists and turns towards tragedy. Joel Kinnaman makes a convincing felon, retaining a scintilla of class in his steel-blue eyes, but Mrdo’s switch to back to psychopath-mode (in the closing moments) feels rather too facile. The rest of the cast are suitably vicious and Madeleine Martin’s turn as Nadja is fearlessly feisty. Ultimately this is a study in one man’s final descent into Hell after crossing a landscape of petty criminality.  In Part II, JW goes from being a decent guy on the margins of society to fully-fledged bad boy in a treacherous snake-pit of venality. Will he redeem himself in the final part of the trilogy? From the look of his eyes in the showdown with Sophie, all bets are on. MT

EASY MONEY: HARD TO KILL IS NOW ON DVD/BLU-RAY and iTunes