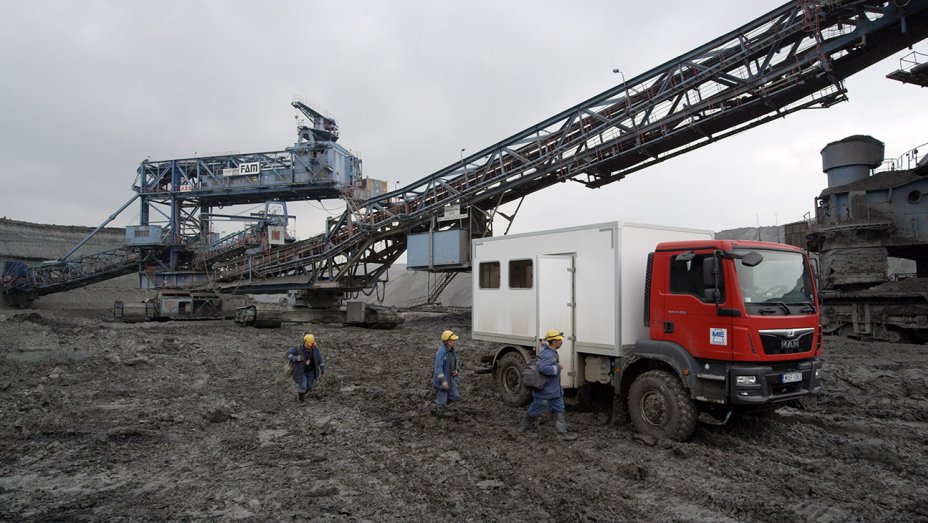 Geyrhalter is a deep thinker who takes a world view and paints on a grand canvas to convey his weighty themes. And although his topics are not always palatable or easy to digest. His concerns are basic yet far-reaching: migration (The Border Fence), Nature vs. Man (Homo Sapiens); health (Danube Hospital); food prodcution (Our Daily Bread) and the 24 hour society (Abendland). Standing back from his subject matter and quietly recording the facts, his ambivalence allows us time and space to consider and form our own ideas.

EARTH is his eighth feature length film in ten years. Divided into 7 chapters, it is another ambitious, immaculately crafted, high end experience, yet the people who inhabit the film are practical, sharing mundane thoughts and experiences as he films them in long takes in the centre of the frame. Then the screen opens up to vast panoramas and then aerial views of mines and construction sites in California’s San Fernando Valley, Fort McKay, Alberta); the Brenner Pass between Austria and Italy; Gyongos, Hungary; Carrara, Italy where the white marble comes from; Rio Tinto copper mines in Spain; and Wolfenbuttel, Germany. Gigantic machines crawl like behemoths on the face of the earth, digging and puncturing – not to mention the occasional explosion. It’s a hostile and even frightening sights as man plunders and probes.

Artistically and logistically bold, and ecologically troubling, the film is a mammoth endeavour. And non of the workers and experts who enliven this ecological study  with their comments admit to being largely ignorant of what they will find next as they scour and delve deeper and deeper into the earth’s core. An Italian worker in Carrara expresses his sorrow for taking giant blocks of marble away from its mountain home commenting:. Soon there won’t be anything left and our ancestors will have to move on the Moon.

The doc, divided into seven chapters of roughly fifteen minutes each, examines man’s devastating impact on the fabric of the plant Earth, endlessly chipping away and scar the landscape, Earth sees man taking over the natural environment, in contrast to Homo Sapiens that sees man’s claiming back its territory. But as the film wears on the ethical issues raised become more and more critical: “Are we a good species”? asks one expert. And one feels that the answer if possibly a clear “no”. We have fetched up on the planet and largely abused it for our owns ends. In the ‘Anthropocene’ era, our incessant intrusion on the natural environment seen through deforestation, mining and construction, together with the use of deleterious man-made materials such as plastic have no doubt led to climate change and pollution of the seas and nature.

There’s a surreal, rhythmic feel to this non-ruminative film. Geyrhalter acknowledges it all with a distant non-judgemental eye, more concerned with the labouring workers whose feint grasp of the apocalyptic enormity of their imprint often beggars belief in the scheme of things. MT