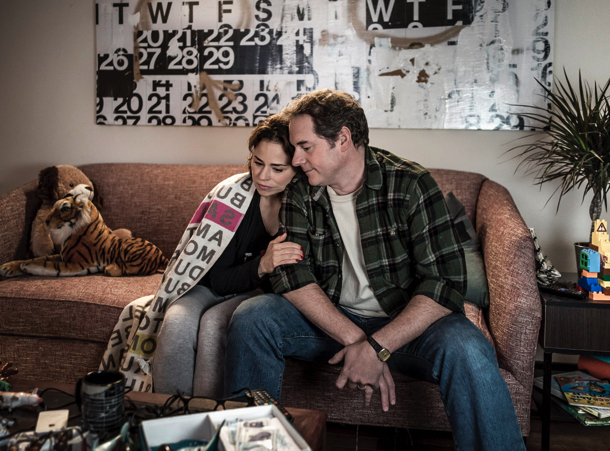 It’s hard to remember a more an unremittingly gloomy portrait of deadbeat marriage than Michael Rowe’s EARLY WINTER. This tonally monotonous domestic drama, posing as social realism, drones on in the dreary dregs of a Quebec Autumn where early snow is an indication that a long winter of disillusionment and discontent is about to set in for a couple who have fallen out of love. Or have they?.

A painfully overlong opening sex scene sets the tone for what is to come – or not to come – in the case of Mandy’s (Suzanne Clement) orgasm: “It’s ages since you came” says her care-worn care-worker husband David (Paul Doucet). Mandy’s sad reply is simply “Don’t start”. Terminally depressed from a tragedy that ended his previous marriage, David works nights in a hospice for elderly patients and his family life is clearly suffering as a result. As he comes home, Mandy gets up to take their two boys: Sergei and Maxime to school before returning to her sofa where she smokes, plays video games and watches TV. Clearly frustrated, she is an unpleasant and tetchy individual whose only mild enthusiasm is her favourite son Maxim.

Paul Doucet’s David is far the most engaging character in the piece: a crumple-faced gentle giant on anti-depressants, he  gradually emerges as the driver in an accident that killed his daughter. Buttoned-up in his sadness and treading water in a ocean of repressed tears, he calmly radiates love and affection but receives little in return from either his wife, his patients or his co-worker who has her own tragedy to deal with.

EARLY WINTER works best as a character study of depression but there is no dramatic tension here in a story that features too few chinks of light or movement in its darkness. A talapia playing friskily by the waste bins and a mouse making its way warily across the family’s battle-strewn living room provide brief moments of release in a sober story that is shot in frames that enforce visual and emotional distance from the characters, whose lives are kept at arm’s length, and whose heads are often missing.

Cannes Camera D’Or winner Michael Rowe has made a difficult, often uncomfortable film to watch. Running at just over 90 minutes it feels much longer and gives us very little to appreciate about its characters or its subject-matter. Mandy and David are a fractile, toxic pair whose marriage, like many others, seems likely to endure even the bleakest Quebec winter. MT