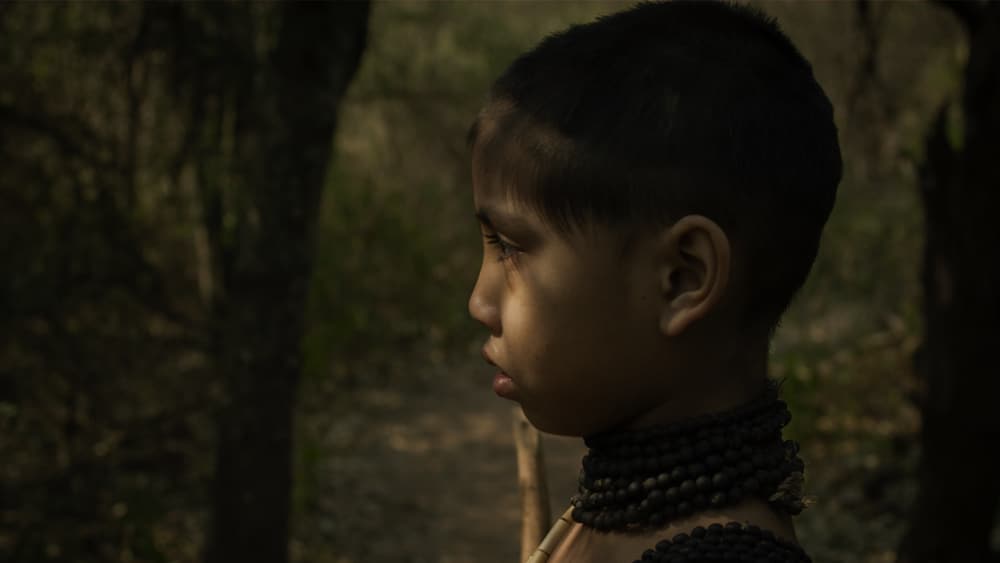 When it comes to deforestation Paraguay is the world’s worst affected country. And the human cost is illustrated here in Paz Encina’s fiction/documentary hybrid focusing on the indigenous Ayoreo-Totobiegosode tribe who have been driven from their forest homes by profit-orientated developers.

Universal themes of exile and grief are explored through a poetic stream of consciousness narrative where EAMI (Picanerai) describes the displacement of her tribe by the invading conones in a fable-like structure: she is the child and also the re-incarnation of a bird deity Asoja (Etacoro) who communicates with her. The boundaries between past, present and future are fluid – mankind, creatures and gods mingle on the same level, and the border between life and death is transient.

The conones are led by a blond woman, her male staff are afraid of her, and the men use dogs to submit to the Ayoreos. EAMI is bereft because she has lost all her friends, but she garners strength from the memory of her mother. Dicasei, a god with two faces (Picaneral/Etcori), advises  her to leave her bosky home, and an old man prepares her for the journey onwards. The voices of her tribe were recorded by the Mennonites back in 1994. But EAMI always returns to the stories of her lost friends who serve as a touchstone to the past. Leaving the forest means certain death, but staying there also has its consequences: the conones brought diseases that proved fatal, the tribe having no immunity to resist: “My sister died of the flu, because we were not vaccinated. My mother and her Shaman woman died, because they did not eat the food of the conones.” EAMI sees the birds circling above her. “The lizard told me to carry the world and the forest inside me”. We hear chanting, and EAMI opens her eyes as the plain becomes red and the storm subsides.

Encina, who won the Cannes Fipresci Prize in 2006 for her debut feature Paraguayan Hammock, has only been able to make one film since then, but this attempt to raise the profile of another community struggling to survive is a worthwhile and graceful one. AS