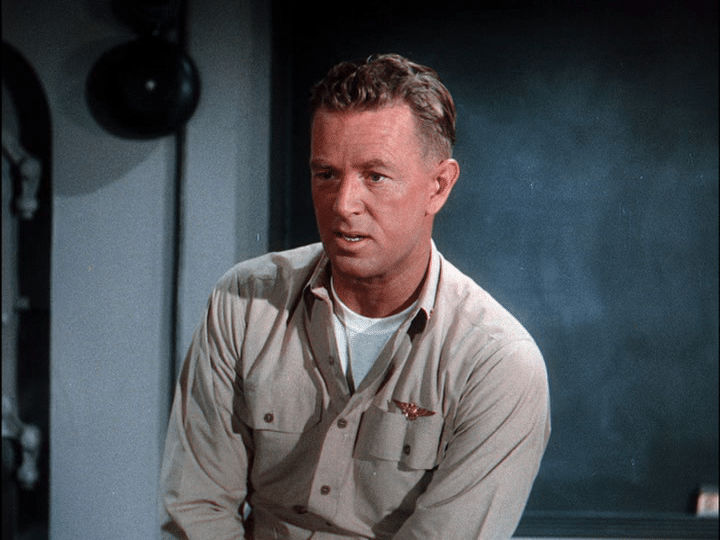 The opening credits and martial music seem rather grand to be bearing the infamous name of poverty row purveyors Monogram Pictures – now moving (for them) upmarket and soon to rebrand themselves Allied Artists – by whose standards this production by Walter Mirisch (who later gave us The Great Escape) obviously represented a prestige project.

Those with a knowledge of US military aircraft will as usual have a great time pointing out all the mismatched aircraft footage (just as trainspotters never tire of pointing out that the rolling stock is all wrong in any film with a railway setting); but the 16mm Kodachrome film shot by enterprising wartime cameramen was already proving a gift that keeps on giving, of which this early production was an early beneficiary, aided by Cinecolor photography by Harry Neumann and art direction and editing by David Milton and William Austin that reasonably unobtrusively blends the original footage with studio work and scenes actually shot on the USS Princeton.

The names of Sterling Hayden and Richard Carlson gave a strong hint as to what to expect, and sure enough we get the usual conflict between granite-faced by-the-book disciplinarian Hayden and nice guy Carlson who comes to appreciate the wisdom of Hayden’s anti-charm offensive on the new boys (who include a youthful-looking William Schallart in a surprisingly substantial early role as ‘Longfellow’).

The film holds your attention for the most part, although Marlin Skiles’ music increasingly emphasises exhilaration rather than grim determination on the part of the flyers; and I did find my attention starting to wander during the final twenty minutes when the excitement was supposed to be at its height.@Richard Chatten