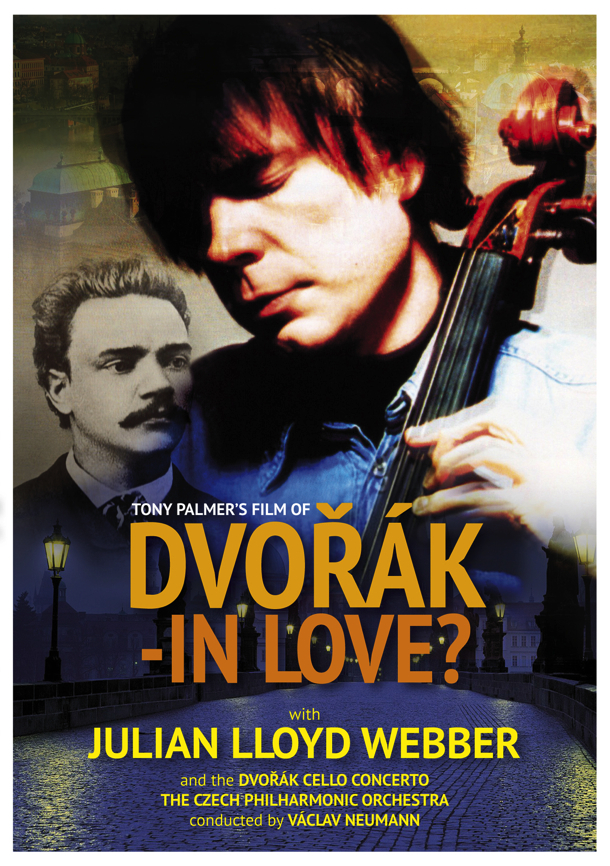 Produced in 1988, the same year as his Shostakovich biography “Testimony”, Tony Palmer’s DVORAK- IN LOVE? is set on three levels: the major part consists of a a filmed recording of Antonin Dvorak’s Cello Concerto in B-minor, which he wrote in 1894-95 in the United States. Conducted by the great Czech conductor Vaclav Neumann (1920-19995), with a very young Julian Lloyd-Webber as soloist, it is a detailed study of musical collaboration, which goes into producing a now classical recording. A voice-over forms part two of this project: Dvorak’s letters tell about his undying love for Josefina Kaunitzova, sister of Dvorak’s wife Anna, who was gravely was ill when Dvorak returned to Prague from the USA in April 1895; she died in May of the same year. Dvorak changed a cadenza of the cello concert in her memory. Whilst Dvorak concedes, that “his wife made him famous, managing his affairs”, he never got over Josefina, his first (and only) love; despite having six children with Anna.

Finally, the third element got the TV production into hot water with the communist authorities: set off by Dvorak’s complaints of being repressed by the Austrians in his own country. Palmer includes a compilation of newsreel images from Dvorak’s time to Chamberlain’s surrender to Hitler, Germany’s occupation of Czechoslovakia from 1939 to the end of WWII, and finally the brutal suppression of the “Prague Spring” in 1968 by Soviet troops. The film was not shown before the end of the Soviet Empire, one of the first documentaries broadcasted on independent Czech TV.

Neumann speaks mainly German, Czech only with his orchestra (the Czech Philharmonic Orchestra), the recording manager (who has as an astonishing amount of power regarding repetitions of parts of the music, he is not too happy with) speaks English and German and Lloyd-Webber tries bravely to communicate as much as possible. Clearly, it is a triumph of music over languages. Dvorak’s letters are deeply saddening: he seemed only have married Anna to keep in contact with Josefina, who married a Count. This unrequited love might have driven him on as an artist, but it must have blemished his whole personal life – and most certainly that of his wife. The newsreel clips tell the sad story of a small European country, being occupied by bigger, neighbouring countries for centuries. It hardly matters which language they had to speak, Czech was for private use only. As Dvorak put it so succinctly: “What is an artist without his country?” DVORAK – IN LOVE? is an essay on ‘Heimat’, Love and Music, the way Palmer connects the three is masterful. AS