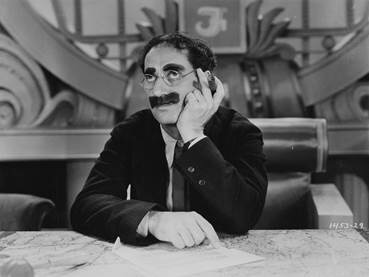 In 1932 Paramount Pictures announced that Ernst Lubitsch would direct the next Marx Brothers film – in the end, after a long contractual fight between the Marx Brothers and the production company, Leo McCarey would be behind the camera for DUCK SOUP a year later. Unlike the successful Horse Feathers DUCK SOUP was not successful at the box-office, but the truth is far from it being the mythical flop: DUCK SOUP was still the six-highest grossing film of 1933.

Mrs. Teasdale (Dumont), a very rich woman, underwrites all the debts for the bankrupt state of Freedonia, which is threatened by the neighbouring country of Sylvania. But Mrs.Teasdale will only go on financing Freedonia if Rufus T. Firefly (Groucho), whom she wants to marry, becomes president and leads them into the war with Sylvania. Firefly is equally incompetent a leader as are the Sylvanian’ spies Pinky (Harpo) and Chicolino (Chico) in their metier, all three just causing mayhem, ending up pelting poor Mrs. Teasdale with fruit right at the end.

DUCK SOUP is famous for its mirror scene when Pinky, dressed as Firefly, imitates Groucho with identical movements. But the harmony is destroyed when Chicolini, also dressed as Firefly, bumps into the two and destroys the symmetry. There are polemic anti-war scenes, including a Mussolini send-off, which, to the great amusement of the Marx Brothers, led to the ban of the film in Italy. The scenes between the straight acting Dumont and the anarchic humour of the Marx Brothers are the highlights of a film, which somehow did not resonate with contemporary critics because, in their opinion, the ongoing Depression was asking for a less frivolous narrative. DUCK SOUP is essentially a surrealist comedy but this did not appeal to audiences at the time and resulted in them losing their contract with Paramount. Subsequent outings under the auspices of Irving Thalberg and MGM, considerably toned down the zany nature of their humour and sets but with Sam Wood directing their later outings (A Day at the Races, A Night at the Opera), the outrageous sending-up of everything sacred as the time including (and especially), Religion, gradually toned them down.

Today, DUCK SOUP is seen as the quintessential Marx Brothers film, and many contemporary directors are influenced by the film, including Woody Allen, whose character in “Hannah and her Sisters” regains his will to live, after watching DUCK SOUP by accident. AS