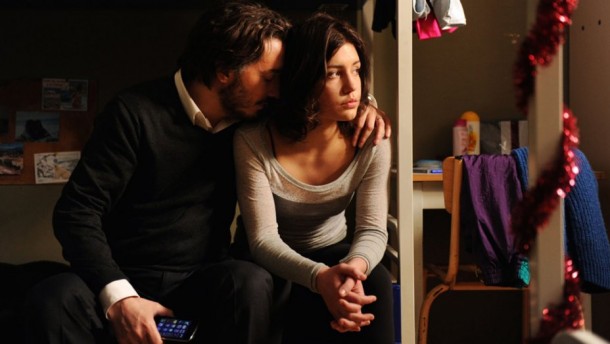 Adèle Exarchopoulos has not attracted the roles she hoped for in winning joint Best Actress at Cannes in 2014 although she continues to garner interest in France and plays the lead here in French director Pierre Godeau’s DOWN BY LOVE, based on a recent true story about a prison governer and an inmate who fall for each other.

Guillaume Gallienne plays Jean Firmino the dishy director of an all-female prison who meets Adèle’s Anna for the first time in his upmarket institution and clearly gives her the once over and then some. He becomes instantly besotted as his gaze lingers on the pouty lips and sultry simpers that blew male viewers’ minds in Blue is the Warmest Colour. This is no ordinary prison but a rather glamorous French detention centre where one imagines the cells to be equipped with velvet-lined manacles and silken whips rather than aluminium toilets and iron bars. Anna is next seen parading down the catwalk in an orange off the shoulder number; clearly the penal curriculum aims to tantalise and tempt the staff working there, and this is exactly what happens between this fresh-faced detainee and the head of the Centre, who immediately demands her full dossier, and it doesn’t end there. Cross-examining her after a fight breaks out in the courtyard,  Anna is amused at Jean’s brave attempts to be severe and rattles his sang froid with her saucy glances, breaking down his defences with confident allure.

Godeau’s script closely follows the real-life inspiration for the male lead, Florent Goncalves, but rather than developing this into a character-driven drama with some psychological insight, Godeau simply relies on potent chemistry and body language to drive the narrative forward. Jean and Anna’s attraction is palpable and convincing but sadly both lack the intensity or experience to really set the night on fire in this rather fluffy affair that fails to fully enrapture for nearly two hours, but nevertheless entertains in an undemanding way. And if you’re not expecting anything deep then Down By Love is a success.

The leads are known for their respective LGBT dramas; apart from Adèle’s standout lesbian role in Blue, Gallienne played Yves’ partner Pierre Bergé in Yves Saint Laurent, and a gay son in Me, Myself and Mum. Here he is delicately sensual rather than heavily draconian and apart from a scruffy beard, looks more like a svelt lawyer or banker than a tough prison head. And for a young 23 year old who has already served time Adèle comes across as peachy and glowing (studing Racine’s Phaedre in the prison library), rather than a hardbitten venal vixen dealing drugs in her spare time, although she does flare up histrionically in a scene where her mother comes to visit. No mention is made of the more serious implications of a Governor caught in flagrante with an inmate half his age, or a man risking his career and stable marriage (betokened in a scene where his kid performs a ballet as he shares fond glances with his wife). The tone is upbeat and tastefully lusty and there is no sign of the rank sexual fervour that may be have been more authentic given the couple’s respective backgrouds in penal reform and criminality.

That said, Godeau’s film is stylish and mildly entertaining despite a rather predicable denouement. Clearly the aim here is to engage its audience in some light romantic reverie between a muddled man with a midlife crisis and a crafty girl who uses her feminine charm to her advantage in a fanciful French affair that passes the time before moving on to pastures new. MT

OUT AT SELECTED ARTHOUSE CINEMAS FROM 17 JUNE 2016