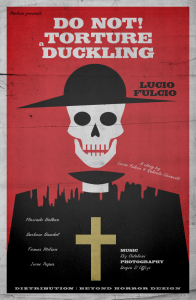 Widely recognised as the rightful competitor to the better known Dario Argento, Lucio Fulci’s films rightly earned him the sinister sobriquet ‘Godfather of Gore’. One of the most frightening giallo thrillers ever – more for its casual cruelty and psychological aspects than its overt horror tropes – DON’T TORTURE A DUCKLING takes place in a remote Sicilian village where a series of shocking murders point the finger at feared witch Maciara, played by the incredible Brazilian actress, Florinda Bolkan. As the locals clamour for revenge, a city journalist Andrea (Tomas Milian) and his pouty accomplice Patricia (Barbara Bouchet) attempt to shed light on the chilling carnage, but their own lives are soon in danger as the Devil comes to town. MT