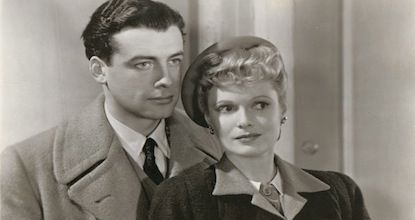 Jeffrey Dell’s best remembered credit as a director is probably Carlton-Browne of the F. O., which he co-directed fifteen years later with Roy Boulting; and which looks like Ken Loach compared to this frenzied exercise in garrulous lunacy set in Chaunduyt (pronounced ‘Condit’), a fictitious rural community with an inbred population whose surnames tend to be either ‘Bucket’ or ‘Pail’.

Richard Greene is just a hole in the screen as the supposed ‘hero’ (compensated for by a very young Patricia Medina as a button-eyed socialist in jodhpurs). However, it looks good and has a typically wondrous supporting cast of the period. But it’s never actually as funny as it should be (despite the exclamation mark in the title and the soundtrack’s strenuous efforts to convince us how hilarious this all is), and the interminable courtroom section that takes up much of the second half of the film is a pale (or should that be ‘Pail’?) echo of the equivalent sequence in Passport to Pimlico.@Richard Chatten