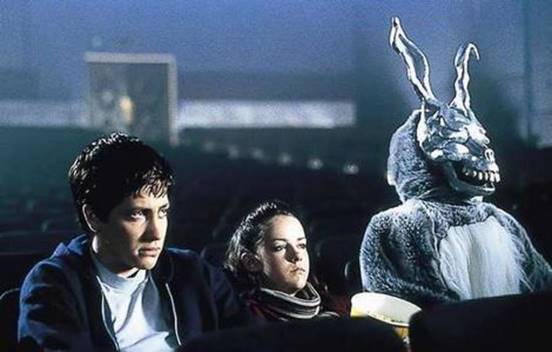 Richard Kelly’s debut DONNIE DARKO is a strange and wonderful beast. The story opens in the wealthy family county of Middlesex, New Jersey where Jake Gyllenhaal’s rebellious teenager Donnie lives with his parents and younger siblings in a plush and leafy part of town. This is no straightforward fantasy but a dark and tonally complex curio seeped in unsettling anxiety that scratches at the edges of horror, and seems even more relevant today in our unpredictable social climate, than it did back in 1988.

Assigned to a kindly behavioural therapist (a middled-aged Elaine Robinson/aka Katherine Ross), Donnie seems to suffer from mild paranoid schizophrenia manifesting in daytime visions of a fierce grey bunny rabbit, who exhorts him to commit crimes and misdemeanours in the upmarket residential backwater where Donnie’s pleasantly straight-laced parents only want the best for him and his sisters Elizabeth (Maggie Gyllenhaal), a Harvard hopeful, and Samantha, who is part of a slightly inappropriate dance troupe.

Donnie is a gifted and smart adolescent whose sleepwalking habit actually saves his life when he narrowly avoids death on the night when a 747 engine lands on the family house. This is weird for two reasons: the rabbit told him to make himself scarce before the event, and, there is no trace of the engine’s plane. And when Donnie’s doc discovers he has stopped taking his meds, she recommends hypnotherapy, which ends embarrassingly – on the verge of Donnie playing with himself.

Gyllenhaal is perfectly cast in the lead: far from geeky, his face has a compelling quality that is both wholesome and otherworldly depending on Steven Poster’s clever lighting techniques. He also conveys a dreamy sexuality that feels entirely natural as he falls for Jena Malone’s troubled teenage crush, Gretchen Ross, who father is a criminal.

But the underlying theme of the narrative is teenage anxiety in all its forms. And Patrick Swayze’s inspirational school mentor Jim Cunningham aims to counsel the kids on how to realise their true potential, adding a very prescient and modern day touch to the proceedings.

Where Donnie Darko slightly goes off the rails is in scenes featuring the ‘wormholes’ as described during the physics lessons. These are shown in  bubbles that extend from each character’s torso, yet move the film from its disturbing psychological agenda to an unfeasible fantasy territory that feels unconvincing and lacks the charm of, say, Michel Gondry’s magic realist moments in Mood Indigo.

But Gyllenhaal’s mesmerising and mystical performance carries the film through these flaws, making Donnie’s sinister world of worry a compelling and

twisted portrait of teenage anguish and a convincing parallel universe to his upbringing in conventional suburban America of the 1980s. MT

DONNIE DARKO is on Arrow Films and Mubi.