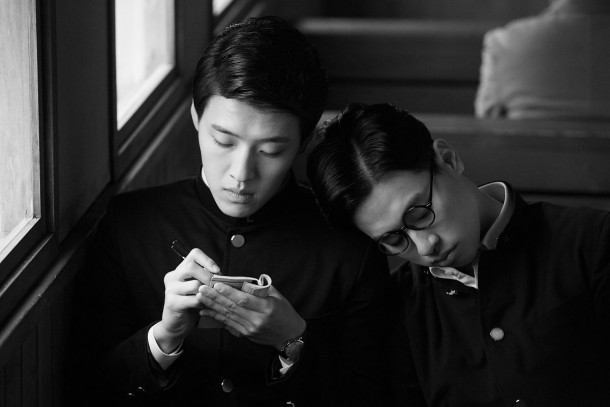 Much of Korea’s historical cinema harks back to the Colonial era as blockbuster director Lee Joon-ik teams up here with arthouse auteur Shin Yeon-sik (The Russian Novel) for a stylish black and white indie biopic of Yun Dong-ju, an early 20th century poet (sensitively played by Kang Ha-neuf) whose voice conveyed the sentiment of an entire generation in Korea when the country was under Japanese rule.

Lee’s delicately romantic and often humorous treatment is underpinned by Shin’s potent script that successfully evokes the artistic subject matter, exploring Yun’s lyrical poems that led to his imprisonment by the Japanese authorities who tortured and emotionally abused him, along with his friend and resistance activist Mong-kyu, during the Second World War.

The tone is light but serious in a narrative that explores the young mens’ burgeoning creative talents and the difficult relationship with their traditional parents – who try to force them into more solid professional careers – as they hone their craft in preparation for university. Deeply affected by Japanese Imperialism, the education system comes under pressure as Japan’s try to submerge Korean heritage and force its own culture on the country through the educational establishments.

Young ‘matinee idol’ stars Kang Ha-neul and Park Jung-min are well cast and supported by more established performers. This is a film that will possibly have more appeal to young audiences than the more diehard arthouse connoisseurs but offers thoughtful insight into an interlude of Korea’s creative past. MT