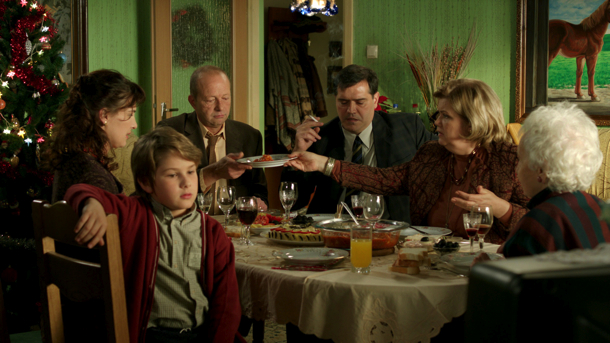 Surviving every day couped up in close proximity naturally brings out the worst in this group of ordinary Romanians living in an apartment block, Adrian Sitaru’s third feature offers another Romanian New Wave meta cinema outing; a black comedy that draws its humour from inane conversations and small talk between families and neighbours, seen from a ‘fly on the wall’ perspective. Dialogue-driven, it takes a simple linear narrative style.

Nothing really happens but they moan about everything from failing technology, pets fouling the common parts to immigration and these banal conversations take on a surreal aspect reflected, ‘fly in the wall style’ in long static takes from Adrian Silisteanu’s voyeuristic camera, which occasionally wanders out into the open air to capture cats, rabbits and other local fauna.

Mainly known for his TV work, Sitaru’s previous award-winning dramas Hooked and Best Intentions followed various characters and their relationship crisis.  When the subtitles in one long kitchen scene are almost impossible to read (as they are white on a very pale background);  this highlights just how much these meta dramas are rely on their dialogue, which is essential in driving them forward. MT