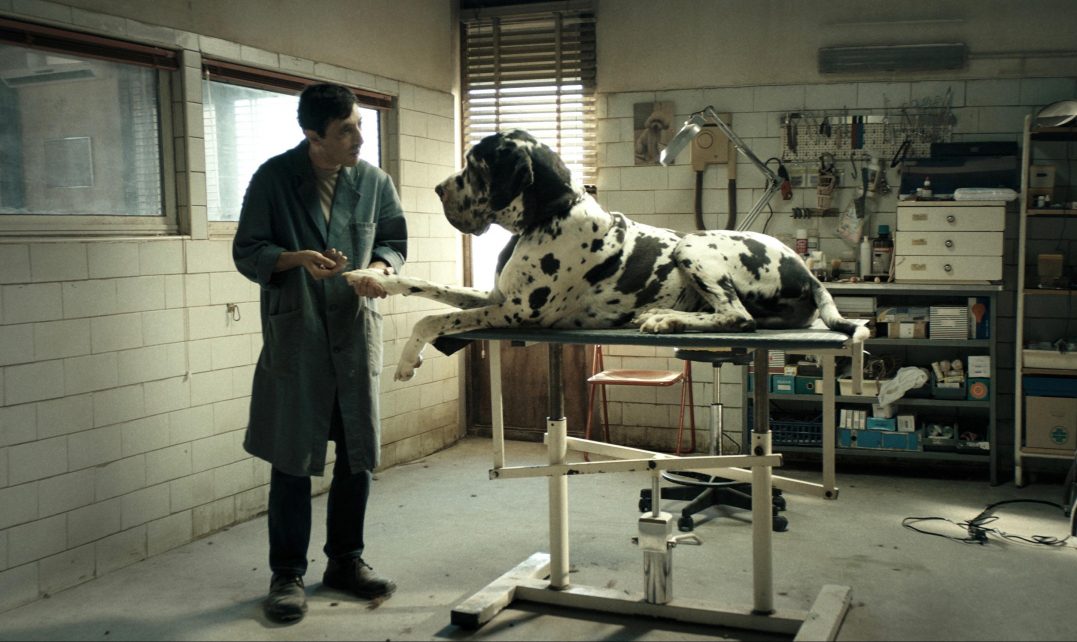 Matteo Garrone’s terrific revenge thriller returns to his own stamping ground of Caserta with a richly thematic and compulsive exploration of male rivalry in a downtrodden dog eat dog football-playing community barely scratching a living.

Life has always been tough in this neck of the woods, infested by gangland influences: it is a terrain that Garrone knows and describes well in his 2008 feature Gomorrah. A brutal brotherhood controls this bleak beachside wilderness where everyone relies on each other to survive.

At the heart of Dogman is a tour de force turn from actor turned director Marcello Fonte who plays an endearing and diminutive dog grooming supremo who, although popular and kind, has formed a toxic twosome with local hoodlum and sociopath Simone, a thorn in his side who is always dragging him into trouble. Marcello’s wife has cleared off and left him to care for his young daughter Sofia (Alida Baldari Calabria) –  and dog-grooming hardly makes ends meet, so to keep Simone sweet he supplies him with cocaine and courtesies, though secretly he wishes him dead.

Marcello possesses the same innate goodness as Lazzaro in Rohrwacher’s drama that played earlier in the competition line -up. And he’s gifted and patient with the dogs brought into his shop, and in one scene he actually goes out of his way to rescue a chihuahua who has been nearly frozen to death in a botched robbery.

Garrone uses similar ‘good and evil’ themes as Scorsese in his New York street thrillers where one good person is perpetually trying to redeem the others, against the odds, and often at his own expense. Marcello is keen on his friends and is popular and wants to keep it that way, but Simone is a liability and one day will lead him to tragedy.

This is a gritty and violent film and often unbearably so, but there are moments of heart-rending tenderness between his Marcello and his dependants, where tears will certainly well up. Fonte won Best Award at Cannes for his skilful portrayal that switches subtly from sad loner to desperado.

Garrone sets the desolate scene resonantly with his brilliant lighting and inventive camerawork, this time working with DoP Nicolai Bruel, who paints this part of Italy with an almost gothic desperation highlighted by Michele Braga’s mournful musical score. MT