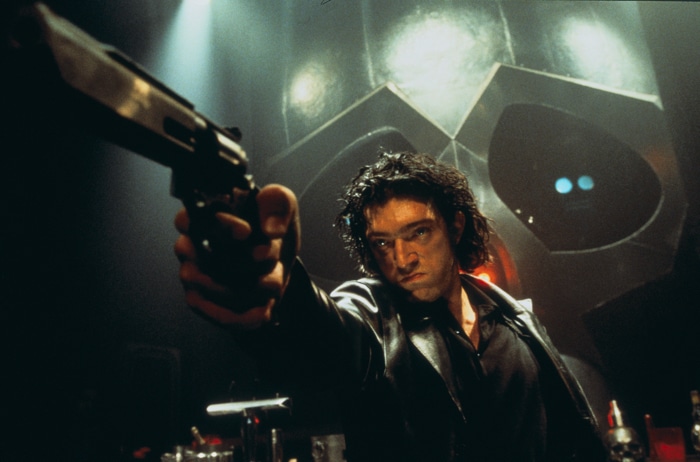 Cassel and Bellucci were already real life lovers setting the tone here as an ’80s Bonnie and Clyde duo, based on the comic strip series by Joël Houssin, who adapted the film version with the director.  It all kicks off with Yann (Cassel) still wet behind the ears at his Christening, after the CGI Dobermann had lifted his leg over a dead cameraman in the opening credits. Just in time for young Yann to end up with a .357 Magnum in his stroller.

Twenty years later he has teamed up with mute Roma beauty Nat (Bellucci) and a crew of violent misfits: narcissistic L’Abbe (Bettenfeld) enjoys his fake priest outfit, while Nat’s brother Manu (Duris) has incestuous longings for his sister. The gang specialises in bank heists, driving psychotic police inspector Christini (Karyo) mad with nightmares of revenge. After successfully managing three parallel robberies, Christini again being foiled, the inspector and his men raid the family home of Sonia (Metzger) who lives a double life of law student and trans sex worker. Threatening Sonia’s baby son, the policeman then finds the gang is celebrating with raids in an S&M techno club.

Hard core sex and strobe lights accompany an orgy of brutality in a prolonged police raid that gradually loses its sting and shock impact: the stylish, glittering surface gliding over the film’s rotten core. DoP Michel Amathien’s cross cutting with extreme wide-angle shots, split screens and frenetic editing by Benedict Brunet and Eric Carlier only makes this feel more remote, less reachable. What remains is an exercise in nihilistic violence. Symbolically, near the end, one of the gangsters uses a copy of Cahiers du cinema’ to wipe his bottom in full view of the police cars. Kounen might have aimed for something like Nikita by Luc Besson, but he ended up with a third rate self-parody. AS