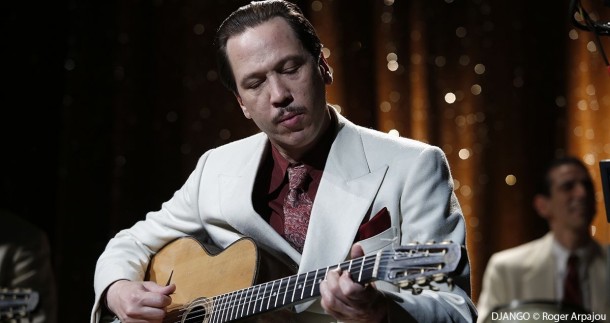 Etienne Comar (Of Gods and Men) sadly fails in his attempt to bring the jazzy verve of Belgian-born Romany Django Rheinhardt’s music to the rescue of this rather earnest biopic, although it cleverly carries the undertone of Nazi persecution of his people during wartime France during 1943, based on the fictional novel Folles de Django by Salatko, who co-wrote the script.

After a thrilling opening in Paris where the musician entertains enraptured audiences while German officials set up a propaganda initiative against his ‘degenerate’ jazz, a narrative torpor sets in despite a game and committed lead performance from Reda Ketab as the charismatic and carefree strummer with Cecile de France seductively sinuous as his agent, who enhances his publicity value to the top brass, while remaining in cahoots with them. Django thinks his popularity will give him protection from the Nazis but wisely refuses to go on tour in Germany after pressure from the powers that be, taking refuge with his wife Naguine (the Hungarian singer Beata Palya) in a village near the Swiss border, where he reconnects with other members of his family, composes a classical work “Requiem for the Gypsy Brothers”, and makes a crafty bid for freedom via Lake Geneva into Switzerland, the Nazis hot in pursuit.

Despite its drawbacks DJANGO offers decent entertainment and is certainly worth a watch for its colourful cinematography and historic footage, but Colmar’s studious and rather stodgy narrative flies in the face of the cherished allure of the musician who captured our collective imagination and fondness with his effervescent brand of jazz. MT