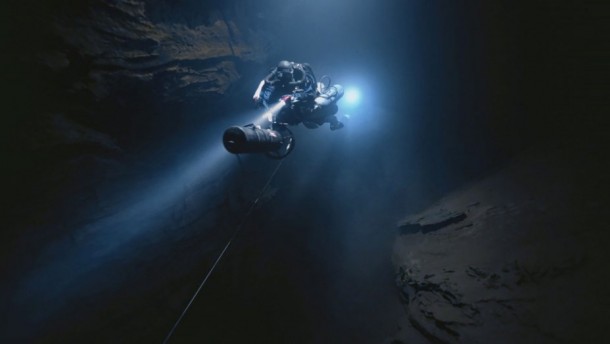 A documentary that will appeal to those who get their kicks from extreme sports or the great outdoors DIVING INTO THE UNKNOWN follows four Finnish cave divers trying to recover the bodies of their colleagues (who died in 2014), in a feat that pushes out the boundaries of this dangerous sport.

Many may question the thrill of plumetting into perilous potholes: Cave diving carries the added bonus of the freezing cold water and ice.  In Norway, documentarian Juan Reina follows the group to Mo i Rana, northern Norway, as they defy the authorities – who have failed to bring up the bodies – in a life-challenging mission of covert recovery, 100 metres below the surface, and in strictest secrecy. Visually striking snowbound landscapes and computer graphics help us to appreciate just what is at stake during this dangerous opertion. Clearly careful planning and working in unison are the main considerations, and Reina spends time interviewing the party as they organise the life-threatening trip before heading into the hostile terrain in this isolated part of the pennisula. Chainsaws are needed to cut through the ice before they can descend into the freezing subterranean depths of the Plura river, taking with them breathing equipment and heavy hearts. Failure is clearly not an option this time, and the men emotional and nervous, not least because they are technically unauthorised to proceed. But their fear is made more tangible by the very nature of cave-diving, that requires mental strength and self-belief as well as peak physical fitness. And are no longer as young as they were. The emotional unpredictability of the encounter is what seems to fascinate Reina most. And he homes in on the psychological aspects of the dive, as well as the technical difficulties. Crucially the filming relies on cameras strapped to the men, so luckily the director is not forced into the feat of following the divers down himself. What happens next is intriguing in this impressive documentary thriller. MT