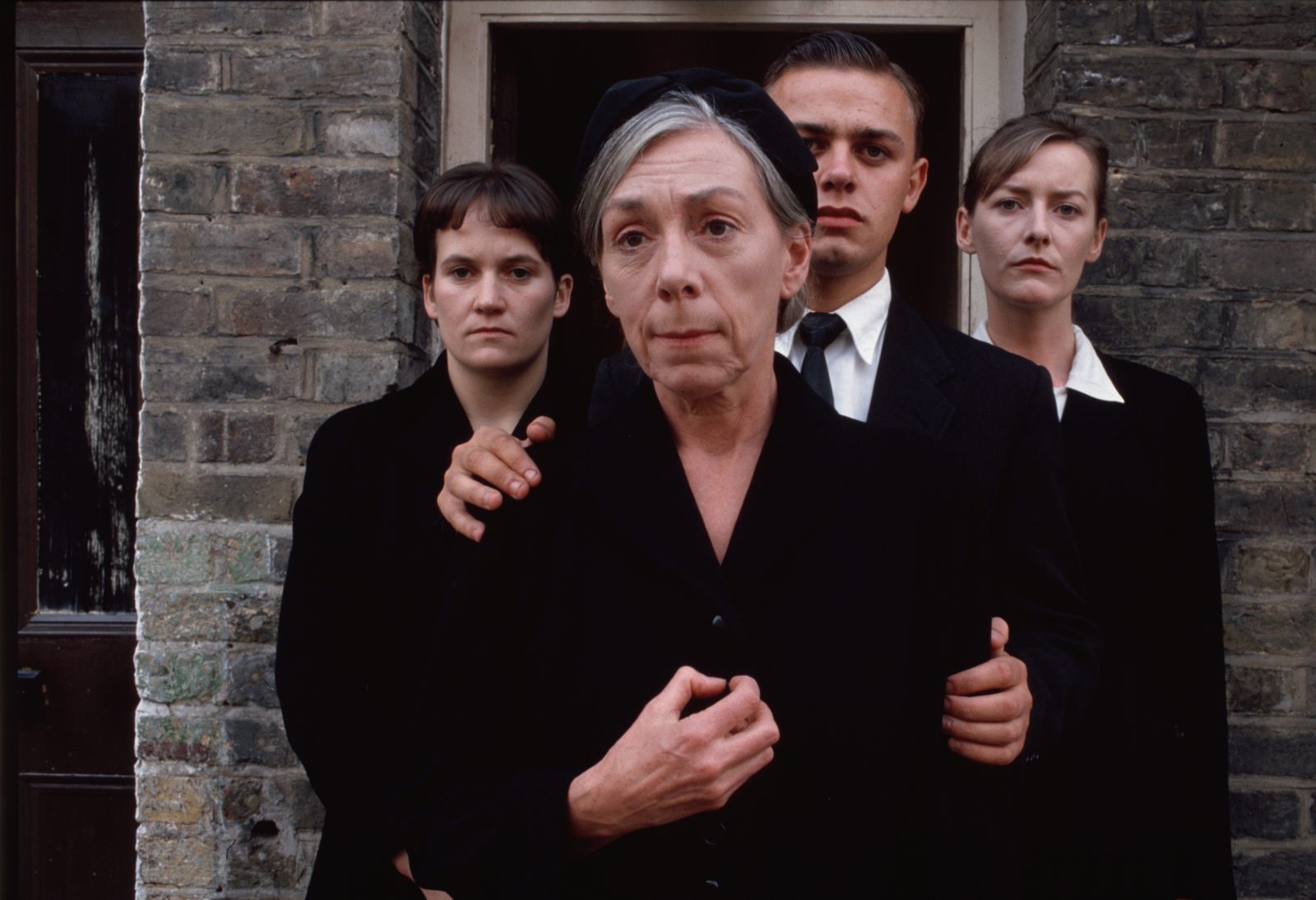 Davies’s epic, musical celebration of the working class evokes a late 40s to late 50s cultural space. This was  soon to be replaced by more individualist post 1963 space where there existed, in certain areas of Liverpool, communal values and social cohesion. All that celebration of feeling (Distant Voices, Still Lives is a visceral and passionate work) comes hurtling back with vivid memories of a lost culture. It wasn’t all good, nor that bad, just considerably more honest and trusting. A lot of life was regimented, ordered and repressive yet authority had still managed to resist the effects of intense commercialisation.

By 1988 we could look back wistfully at the better, and more authentic, aspects of those far distant voices and still lives – with “still” meaning organically centred or fixed by memory – and wonder what the film was saying about us in the present. By the eighties some of us sensed that society had become a hard and rapaciously driven market culture.

Now in 2018 we can more thoughtfully analyse, to the point of mourning, the family and neighbourhood values that Distant Voices, Still Lives both celebrates and critiques. Those values may be now corroded, or even lost to us (Brexit is looming) but such a deep expression of the communal found perhaps its greatest, and most un-patronising, expression in Terence Davies’s eloquent film. Alongside such British films as Powell’s A Canterbury Tale, Losey’s The Servant and Anderson’s If…it’s a masterpiece and a landmark picture about English identity, class, aspiration, emotion and power.

There is no linear narrative. The story is simple. A family’s reaction to a tyrannical father (brilliantly played by Pete Postlethwaite.). His death. The mourning. New life for the family as they grow up, marry and have children. The celebration of that fact. Growing old. The vicissitudes of extended family life where patterns of domestic abuse are dolefully repeated. Things forgiven. Put up with. Then, from the women, the fighting back. Whilst the men remain both complacent and shaken.

The film consists of two parts with the Still Lives section being filmed two years after the Distant Lives half. It’s a cyclic memory film indebted to Alain Resnais (minus the cerebral) and with a warmth that we get from Jean Renoir (all the performances of Distant Voices, Still Lives feel more ‘lived’ than acted.) Impressions, fragments, epiphanies, words and gestures are rigorously bonded by two musical soundtracks.

We have the music of popular culture, such as O Mein Papa, Love is a Many Splendid Thing, blues, classical art and folk song (O Waly Waly) Vaughan Williams’s 3rd symphony, choral music, radio comedy and the shipping forecast amongst others.

That eclectic line-up functions as both counterpoint and relief to the song repertoire of ordinary people at home or in pubs singing their hearts out. Such popular songs as Taking a Chance on Love, I Love the Ladies and Dreamboat. Yet not just hearts but also minds are revealed as Terence Davies skilfully uses song with a dualism to both masquerade and expose his characters’ thoughts.

Take the moment when actor Angela Walsh sings her solo “I Wanna be Around to pick up the pieces when somebody breaks your heart” it’s especially affecting when you realise she is unhappily married. None of the community singing ever becomes mannered or sentimental. Its pitch-perfect delivery keeps delving into character motivation – raw, soulful and compassionate utterances: collective and individual needs are voiced and move the film’s people on, in time and space, through beautifully shot and composed scenes. (Interestingly the fierce father never gets to sing with a group. His only lone singing moment is when he’s shown cleaning the coat of a pony in a barn, watched by a secret audience – his children when very young.) The musical genres of opera, operetta and the MGM musical (adored by Davies) giving his film the structure of a hybrid, autobiographical ballad. And complementing this extended song (both joyful and heartbreaking) are some masterly tracking shots.

One breathtaking example is one where a daughter weeps for her dead father and the camera moves along into darkness, followed by lit candles and the Catholic family together celebrating Christmas. States of death, belief, innocence and forgiveness are effortlessly trailed in front of you like a cine-poem (Terence Davies greatly admires T. S. Eliot.) Watching it again I thought of the working class voices of the pub scene in The Waste Land and flash forwarded to Davies’s 2008 Liverpool documentary Of Time and The City where Davies himself reads excerpts from Four Quartets as his camera tracks over the waterfront’s Royal Liver building at night.

I return to the year and month the film was released – September 1988. My father died aged 79 in May of that year. I wrote a short film script about him. It was called A Box of Swan and was accepted and broadcast on BBC2 in October 1990. Pete Postlethwaite was cast in the film as the older son having to deal with the funeral arrangements of his father.

My own real father wasn’t like the violent man portrayed by Postlethwaite in Distant Voices, Still Lives. But when I witnessed the domestic violence depicted in Davies’s film I thought of my long dead Uncle Harry. He was a morbidly religious man and did what the father did in the film – beat his daughter and wife with a broom in the coal cellar. I thought of my poor Aunt Edie. And not just how art, as the cliché goes, imitates life but can tighten your memory’s hold on the cruelty of real actions.

Yet cinema can also have a powerful redemptive charge. And Davies’s courageous film is of that high order of filmmaking. I don’t know if he knows, along with Eliot, the poetry of W.B.Yeats but the working class rituals and habits of Distant Voices, Still Lives make me think of lines from his poem A Prayer for my Daughter.

“How but in custom and ceremony

Are innocence and beauty born?”

You don’t have to know any of this poetry to appreciate the film, for it has its moving and cinematic own. And is, without me really needing to say, wonderfully acted by all concerned, a technical triumph (now beautifully re-mastered) very sad, very funny and resolutely affirmative – once seen it’s unforgettable. Alan Price©2018