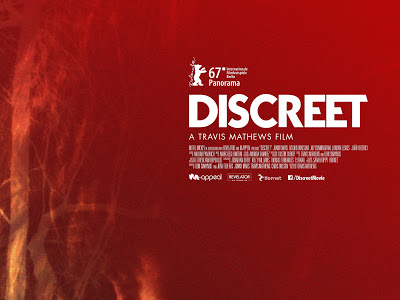 Writer/director Travis Mathews (Interior. Leather Bar) relies very much on atmosphere in this moody drifter/road movie, set in a desolate Texas, where the anti-hero is alienated and caught in a diffuse past.

DISCREET starts and ends in a setting alongside a stream where in the opening scene a black body bag is thrown into the water, but hardly moves. It is Alex (Mars), the main character, who throws the body bag into the river, and, throughout the film, he is in communication with Mandy (Okatsuka), who runs a website called ‘Gentle Rhythm’. It’s content is always introduced by image of flowery wallpaper, through which Mandy tries to communicate her peaceful mantra.

Mathews was clearly trying to evoke alienation and displacement for an American male who has not freed himself from his childhood, reliving it is constantly whilst driving aimlessly in an hostile environment. Unable to have any meaningful relationships, he uses Mandy’s website as a form of outlet, dreaming of a better future, without being able to envisage it clearly.

But Alex’ fragmentation is duplicated in the film’s structure, which allows the audience not vey much insight. Whilst certain segments are interesting, they do not really form a cohesive narrative together. Doing away with a narrative structure is fine, but one has to replace it with something, not just impressions and repetitions. The male lead is too weak to drive proceedings forward in a meaningful way. DoP Drew Xanthopoulos has the thankless task of holding everything together. He tries his best and succeeds with some disturbing images, particularly in the claustrophobic world of the porn booth. But overall DISCREET fails to make an impression as a gay interest piece or a mainstream arthouse title – even at eighty minutes.AS