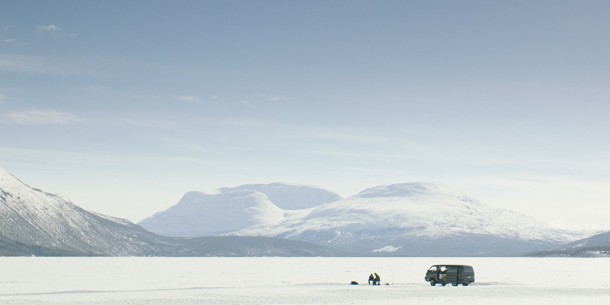 Set in the frozen Norwegian countryside, this chilling portrait of a dysfunctional family is a death dance, performed without mercy, leaving the audience devasted by the waste of human lives. But director Boudewijn Koole (Kauwboy) never allows any sentimentality to develop: he observes his characters with clinical detachment, withholding  judgement at all times.

Roos (Lodeizen) is an internationally renowned photographer who regularly visits her mother Louise (De Brauw) and half brother Bengt (Hanssen) in the Norwegian remote wilderness. We soon learn from Bengt that the last visit ended in a fight between mother and daughter, with Roos leaving, without saying good-bye to Bengt. The mother-daughter relationship seems beyond repair: When she was a little girl Roos chose to live with her father, after he left Louise for another woman. But Louise, a former ‘Wunderkind’ and now a piano teacher, is more concerned that Roos has given up the piano and chosen another profession. For Louise, this is a double betrayal – but one she can’t admit to. Struggling to gain her mothers acceptance, and feeling unloved, won’t confess to a serious illness. After a brief dalliance with her ex (Oftebro) in the back of his car, she nearly reveals her unspecified illness (we suspect cancer, because she is examines her breasts at length), but she finally opens up to her mother after another fight which ends badly. Strangely enough, Roos’ refusal to have further treatment, brings mother and daughter together, leading to an overwhelmingly moving finale.

There are some lyrical moments between Roos and Johnny on the ice, where they dance to the pop music of their youth, trying to recreate a past they have both left behind. Nature and animals seem, overall, to promise much more peaceful relationships than humans. Bengt uses Roos’ present of a very sophisticated microphone to bring the ice to “sing”. And Roos is very fond of her mother’s dogs – much more than of their owner. Neither Roos nor her mother are able to give each other unconditional love: they can only love their “mini-self’ in a non-adult way. But they deny their love to the grown-up versions of others. Mother and daughter are both familiar with the idea of loving, but are not able to accept that they are both very different people – and thus, each denies the other’s right to live a different way of life.

Koole has already collaborated with the writer Jolein Laarman on Kauwboy, and uses his script successfully to show, without spare dialogue, the inability of two adults to find a modus vivendi. DoP Melle van Essen’s landscapes are much more powerful than the struggling people who inhabit them, Disappearance is a study of denial, played out against the majestic backdrop of nature. AS