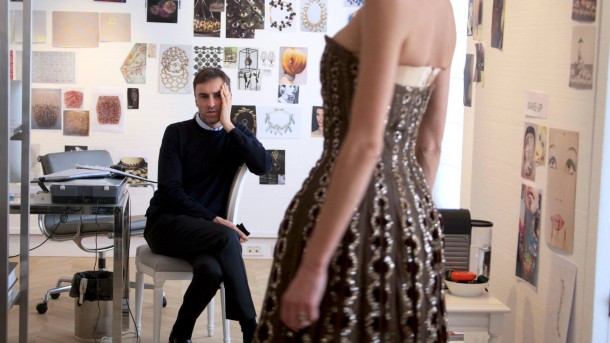 In early black and white news footage of Christian Dior and his creations, shown in the opening sequence of Frédéric Tcheng’s documentary the designer comes across as a timid, elegant, family-loving man who “hated noise”. But this is all we really discover about a legendary icon who founded the House of Dior in 1946, only to work there for 10 years. Tcheng then shows how the brand still lives on with its clear and powerful mission to create ultra feminine designs.

In the contemporary Paris atélier we meet Raf Simons (ex Gil Sander) the new creative director and a minimalist who started life as an industrial designer, and who is now set to take over the house, attempting to modernise the haute couture side while also staying faithful to the Christian Dior ethos. He has just 8 weeks to prepare for the premiere launch.

As Raf steps up to the grand stage, it is hoped he will embrace this feminine image with all its embellishments while taking it into the 21st century. Tcheng intercuts his documentary with frequent news footage of the Dior’s early years, showing how he created the “New Look” celebrating the end of rationing to create a full-skirted female silhouette as couture took on a more womanly and floaty profile in the post war fifties’ return to voluptuousness after the austere, masculine, structured look of the forties.

We see how Raf Simons works quickly and formally to create his vision for a new dynamic woman, producing 12 looks that are then taken up by each of the seamstresses, who each chose their favourite design and then get to work on the launch. This is a stressful, pressurised time, running to deadlines and balancing creativity with practicality: but the house has ample finances to draw on thanks to its ownership by Bernard Arnault (billionaire Chairman of LVMH).

Raf Simons feels an increasing empathy with the late designer: reading his memoirs and even visiting his childhood home for inspiration. Dior and I works best when focusing on this theme of creativity and the essence of fashion genius, giving valuable insight. Sadly this fascination fades as Tcheng draws his focus towards the hurly burly of the premiere and to pleasing Dior’s illustrious clientale and members of the Press. This is a process we’ve seems many times before in his recent Diana Vreeland and Valentino outings, and the Carine Roitfeld documentary Mademoiselle C in 2014. Although Simons appears confident and in control during the design process, he quails away from Press interviews and claims he ‘would faint’ if required to walk down the catwalk.

While starting promisingly Dior and I descends into a clichéd affair of air-kissing celebrity. Insight into the conflicts, personal dynamics and professional relationships are buried under a deluge of tears, Champagne and roses once the premiere is underway and Tcheng draws the focus away from the more engaging topic of Simons’ creative strategy and the real Mr Christian Dior, who sadly remains an enigmatic character. That said, this is an upbeat, well-paced and compelling introduction to the elegant and sophisticated House of Dior.  John Galliano is nowhere to be seen. MT