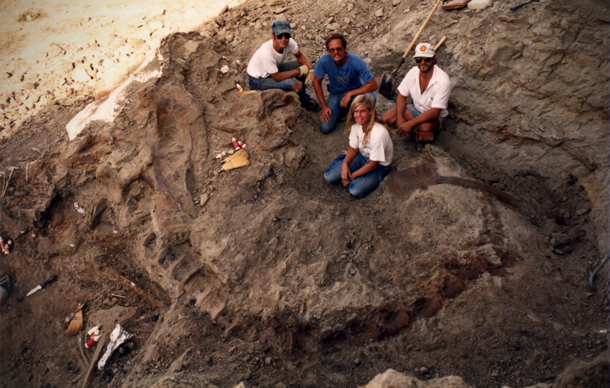 In the summer of 1990, a group of palaeontologists from the Black Hills Institute of Geological Research discovered the fossilised remains of a Tyrannosaurus rex, later to become known as ‘Sue’. Prior to this discovery, only twelve T. rex’s had been found, and all of these were less than 40% whole. In contrast, over 80% of ‘Sue’ survived, making her the largest and most complete T. rex ever found.

The group from Black Hills Institute, led by Peter Larson, paid landowner Maurice Williams $5,000 for the remains, before taking them to their base in Hill City to begin the process of restoration. In 1992, however, the FBI and National Guard swooped in and seized the remains, claiming that ‘Sue’ had been found on federal land, making her the property of the federal government. Later, ownership of ‘Sue’ would also be claimed by the Sioux tribe, and by Williams, who declared that he had never sold ‘Sue’ to Larson.

This, and the complex legal trial which followed, is the story told by Dinosaur 13, presented primarily in the words of Larson and the Black Hills palaeontologists themselves. The talking heads are handsomely shot, if a little over-cut: one gets the sense that both the filmmakers and their subjects are working hard to make the material dramatic. Luckily, they succeed.

As the film’s coverage of the trial continues, one becomes increasingly aware of the complexity of the legal situation that Larson and his cohorts found themselves in, but slowly it dawns that the moral complexity is being overlooked: sympathy for the palaeontologists is never questioned, and the court case is never presented as being anything other than unjust. And yet, the federal government brought a 39 count 153 charge indictment against the Black Hills Institute and its workers, primarily for fossil theft and customs violation. The incident with ‘Sue’ was simply part of an ongoing investigation, and these charges were not pertaining to her discovery. The trial itself, then, is somewhat at odds with the subject of the film, if we take ‘Sue’ to be its subject – but the film seems to imply a conspiracy, pulling constantly back towards the T. rex. In doing so, the film finds its strongest emotional weight, but also its biggest problem.

There’s no denying that, as we watch those involved talking us through events, we become moved both by their sense of pride and by their sense of injustice – but we never gain any insight into their working methods. The practices they are being asked to account for in a court of law are never called into question. By presenting such a one-sided account, the film forces us into feelings of sympathy and injustice, but at the same time it undercuts these very same emotions by leaving one with the bitter taste of manipulation. If a more balanced point of view had been presented, and we had arrived at the sense of injustice ourselves, the feeling would be all the more powerful.

Still, the defendants’ passion for their discovery is disarmingly engaging, and there’s no belittling the love they clearly still feel for ‘Sue’. In essence, then, one could call this a love a story. Indeed, it is a love story loving told – and that might just be where the problem lies.  Alex Barrett