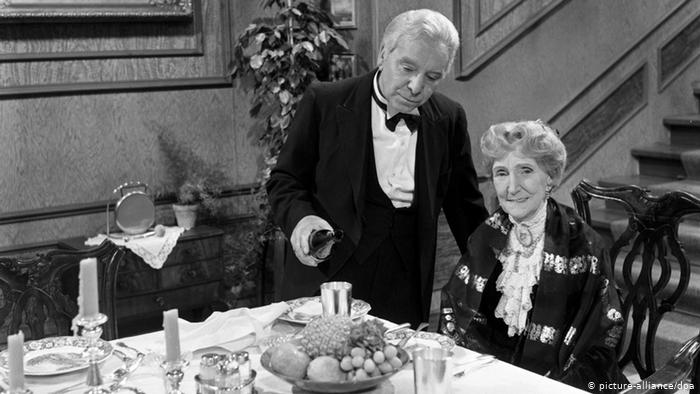 As we bid a less than fond farewell to 2020, families throughout the German-speaking world and Scandinavia will be gathering around their TV sets to enjoy butler Freddie Frinton getting progressively more sozzled in this 18 minute record of an old music hall sketch by Laurie Wylie and recorded in Hamburg by the German Station NDR on 8 July 1963; which has been regularly screened on German TV every New Year’s Eve since 1972.

Ironically nobody in Britain under the age of sixty has probably ever even heard of Freddie Frinton (1919-1968), while those old enough probably recall him co-starring with Thora Hird in the popular TV sitcom ‘Meet the Wife’. None would be more surprised than Frinton himself that more than half a century after his death he’s a household name in Germany, and the enquiry “The same procedure as last year?” (in English) is considered a thigh-slapper.

Even though performed in English and available for over twenty years in a colourised version it took nearly fifty years finally to be broadcast in Britain on Grimsby’s local channel Estuary TV in 2017. If you didn’t see this article until the New Year (like I did when The Guardian thoughtfully first wrote about it about in the edition of 1 January 1998), don’t worry. It’s now on YouTube! Richard Chatten.